Full of passion for the CHIO Aachen for 25 years

Creative, innovative, enthusiastic, courageous, passionate – these and many more attributes were used on Tuesday afternoon to describe two passionate advocates of the CHIO Aachen during a small celebratory ceremony.

Because it is almost 25 years to the day since Michael Mronz and Conny Mütze signed their employment contracts at the Soers. Two personalities who were subsequently key for the development of the CHIO Aachen. “These two,” explained Stefanie Peters, President of the Aachen-Laurensberger Rennverein e.V. (ALRV), organisers of the CHIO, “have broadened our horizon, have totally rethought themes and adapted them to suit the CHIO and the zeitgeist using their fine instincts – and are still doing so through to this very day.”

According to Peters, since 1997 in his capacity as General Manager of the Aachener Reitturnier GmbH (ART), Michael Mronz and Conny Mütze as the company’s authorised signatory have initiated a lot of the aspects that make the World Equestrian Festival what it is today. The conviction that one has to strive for constant further development has always been the foundation for this. “Your credo is that it is always necessary to have the courage to invest,” commented Peters. In particular Michael Mronz held countless discussions with the former ALRV Chairman, Frank Kemperman. Mronz, the marketing professional, Kemperman, the sports purist: “When Kempi said blue and Micki said yellow, the end result was green – to the advantage of everyone involved.” A lot of aspects that make the CHIO Aachen what it is today, for example that it is much more than “merely” an equestrian show, fall back on the creativity of Conny Mütze and Michael Mronz, reported Stefanie Peters, “thank you both for 25 years of enthusiasm, hard work and immense passion.” The occasion was celebrated together with colleagues and companions, among others the two ALRV Honorary Presidents, Carl Meulenbergh and Klaus Pavel, attended the event at the Soers. 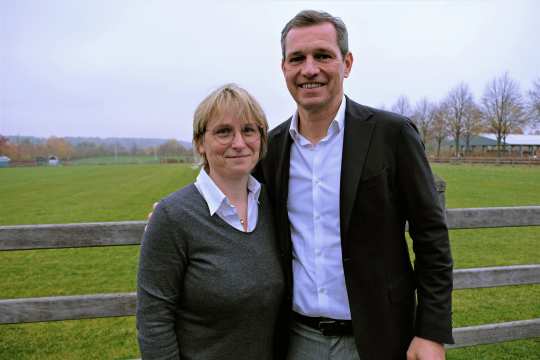