In 2021, Tobias Meyer kicked off the CHIO Aachen with a second place in the Sparkassen-Youngsters-Cup. This year he rode to victory on a horse that he has been riding for a long time although it is only a seven-year-old.

Tobias Meyer has been riding the meanwhile seven-year-old Zangersheide-bred mare Celebrity-H by Comme il faut since she was five. Among others, he presented her at the World Championships of Young Horses in Lanaken and actually the mare has took at least one ribbon home with her at every show she has competed at so far. Today, the preliminary jewel in her crown: her first victory at the CHIO Aachen. The mare crossed the finish line in 60.37 seconds to leave the also just seven-year-old OS stallion, Chad Blue by Chacco-Blue x Sandro Boy under Patrick Stühlmeyer behind her. Chad Blue has also already notched up plenty of victories in his young career. He recently won the Final of the Youngster Tour in Balve under Stühlmeyer. Today, the clock stopped at 62.11 seconds for the pair. The best eight-year-old horse was the Quick Star-son, Easy Star de Talma, who claimed third place with the Olympic gold medallist, Steve Guerdat (62.94). Seven and eight-year-old horses compete against each other in the Sparkassen-Youngsters-Cup. They jump the same course,whereby the obstacles are five centimetres higher for the eight-year-olds, i.e. 1.35 metres for the seven-year-olds and 1.40 metres for the eight-year-olds. 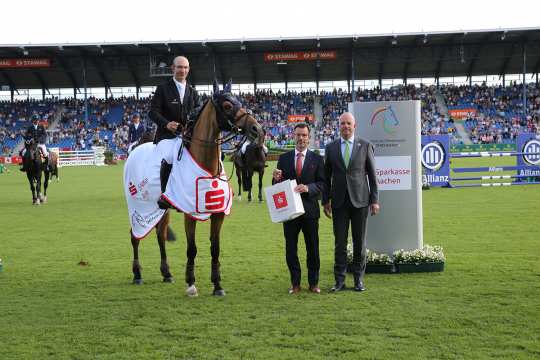