Mettmann’s Moulin Rouge triumphs in the Prize of Handwerk again

The Quadrille Championship at the CHIO Aachen, the Prize of Handwerk is a very special class! The sophisticated choreographies and elaborate costumes would even cut a clean figure in the big CHIO Opening Ceremony. The team from the District Association of Mettmann were especially convincing again today.

The team leader, Marco Schmid and his quadrille members had actually stated that they intended to quit after their victory in 2018, instead they increased the degree of difficulty of their freestyle routine, came up with a motto related to the partner country France, all of which ultimately contributed towards Mettmann claiming the victory again. The winning quartet was made up of Iris Charles with La Lutzi, Jule-Marie Ditthardt with Passion of Night, Chantal van de Griend with Lord Niro and Sarina Bamme with Egon Hurry Up. The judges awarded the group a total score of 18.5 points.

Since Sarina Bamme only filled in for someone else at the last moment, it was not at all sure whether things would go as smoothly as last year. Nevertheless, the team from Mettmann were awarded 9.0 for their technical riding skills and 9.5 for their artistic impression.

“The Oscar goes to Krefeld” was the motto that the District Association of Krefeld brought to Aachen with them. Admittedly, they didn’t quite pick up the Oscar, but second place at least with an overall score of 18 points. The team led by Tanja Liepack, comprised of Lena Backes with Fioretto Festival, Christina Dahl with Las Vegas, Nicole Louven with Laurino and Iris Rommerskirchen with Danoni.

Third place went to the District Association of Düren who finished on a score of 17.7 points. The team leader was Michelle Heuel and the riders were Anne Schagen with Sommermärchen, Rebecca Ida Winkler with Rockadinho, Svenja Wolf with Flores and Deborah Zester with Remington D. 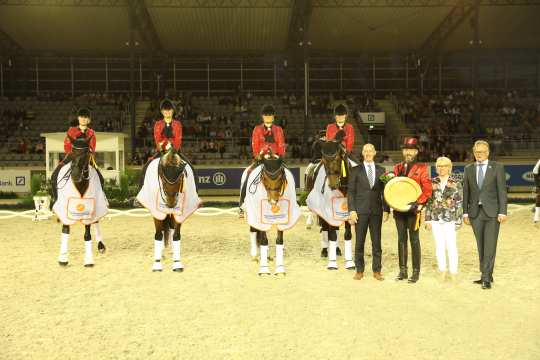