In addition to their victory in the Grand Prix, Isabell Werth and Bella Rose also won the Grand Prix Spécial, the MEGGLE-Prize, which was also part two of the Lambertz Nations Cup, which proved to be easy prey for the German team – for the 38th time. Not exclusively due to Isabell Werth’s top performance.

In addition to their victory in the Grand Prix, Isabell Werth and Bella Rose also won the Grand Prix Spécial, the MEGGLE-Prize, which was also part two of the Lambertz Nations Cup, which proved to be easy prey for the German team – for the 38th time. Not exclusively due to Isabell Werth’s top performance.

Isabell Werth and Bella Rose were faced with strong competition from their own ranks in the form of the German Champions, Dorothee Schneider and Showtime, in the MEGGLE-Prize. Two of the judges even placed Schneider and “Showi” in front of the World Champions. However, in the end, Isabell Werth asserted herself with 84.447 percent. Dorothee Schneider finished second (83.617), and third place went to Charlotte Dujardin (GBR) with Erlentanz (80.277), just like in the Grand Prix.

Isabell Werth and her 15-year-old Belissimo M daughter, Bella Rose, excelled once again in the piaffe and passage. She was showered with 10s – except for in the second piaffe. Werth explained that she had noticed Bella was pretty temperamental this morning, so she didn’t risk all. “I was absolutely satisfied, but it wasn’t the bees’ knees.” Tomorrow is another day – and incidentally Werth’s 50th birthday. Winning the Deutsche Bank Prize for the 13th time would be a nice birthday present, for sure!

The performance of the pair that finished second, Dorothee Schneider and Showtime, was indeed the crème de la crème. Their score – 83.617 percent – is a personal record, even though the 13-year-old Hanoverian-bred Sandro Hit son made two expensive mistakes: one in the transition from the passage into the extended trot and the other in the transition from the passage to canter. Dorothee Schneider was nevertheless overjoyed: “It is very emotional for me to be back with this horse. Today’s last line was like flying.” Showtime had been out of action after a paddock injury in 2017 for a long time. Dorothee Schneider, who has been riding the gelding since he was three and a half, said: “I am proud of this horse and at the moment also of myself because we have grown together so well over the years and performing so superbly meanwhile.”

Charlotte Dujardin, who came third with the Trakehner Erlentanz, whom she is currently riding for her pupil Sonnar Murray Brown, was as in the Grand Prix followed by Jessica von Bredow-Werndl with Dalera BB, who is also a Trakehner. The judges awarded the pair 79.021 percent. Unfortunately, their piaffes, which were one of the highlights in the Grand Prix, weren’t as good today. Jessica von Bredow-Werndl was nevertheless happy with her overall performance: “Apart from the two piaffes it was the best ride of my life!”

The fourth member of the team, Helen Langehanenberg with Damsey admitted herself: “We are definitely not presenting ourselves from our best side here.” In the Grand Prix, the 17-year-old stallion had striked before the piaffes. Today was much better, but they didn’t take any risks. The result was eleventh place on a score of 75.043 percent. “It was a consoling conclusion,” noted Langehanenberg.

Asked as to whether the team didn’t get bored of winning, the Chef d’Equipe, Klaus Röser, replied. “No, we love winning”. 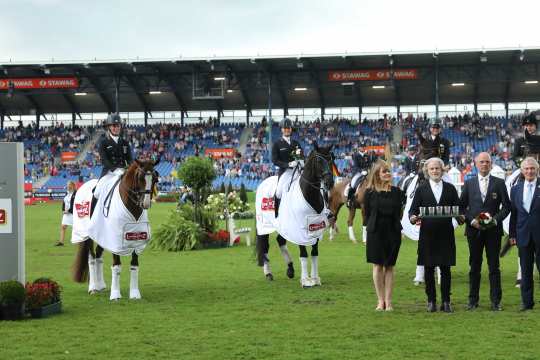