The first floodlit Turkish Airlines – Prize of Europe went to Austria to Max Kühner, who travelled to Aachen well-prepared and with high expectations

Riding his recently purchased and self-trained Eldorado van de Zeshoek son, Elektric Blue P, Max Kühner was the first to go in the second round and put in a fast round in the time of 56.36 seconds, which proved unbeatable for his eleven fellow competitors. “I simply set a good rhythm and the fences came. He felt even better in the second round than in the first.“ Whereby the European Championships in Riesenbeck two weeks didn’t run as planned and Elektric Blue wasn’t in his usual form there. “That taught us a lot,” stated Max Kühner. And now they were able to put into practice what they had learned here in Aachen. “I am delighted, that he is back to his usual form,” the rider from Starnberg, who took on Austrian citizenship, said.

Today’s victory in the Turkish Airlines – Prize of Europe means among others that he has the chance to pick up an extra bonus on Sunday in the Rolex Grand Prix, which after winning today, he has now qualified for. Since he was already victorious in the Rolex Grand Prix in ’s-Hertogenbosch, he could collect a further 250,000 Euros in addition to the prize-money for winning a second Rolex Grand Prix in one Rolex Grand Slam cycle. His strategy: “We are going to give it a shot and I am naturally highly motivated that I can pull it off. Blue feels at home in the stadium. I had the feeling he really had fun in the jump-off and that gives me a good feeling for Sunday.”

I am an “expert at coming second”, stated Luciana Diniz after the prize-giving ceremony. She reached the finish line with her top horse, Vertigo du Desert, in a time of 56.55 seconds and thus won the silver rosette. She has already finished second in the Turkish Airlines – Prize of Europe twice, and also in the Rolex Grand Prix. Her aim is to finally triumph in Aachen on Sunday. Watching Vertigo buck happily as he left the stadium, that definitely seems to be within the realms of possibility. 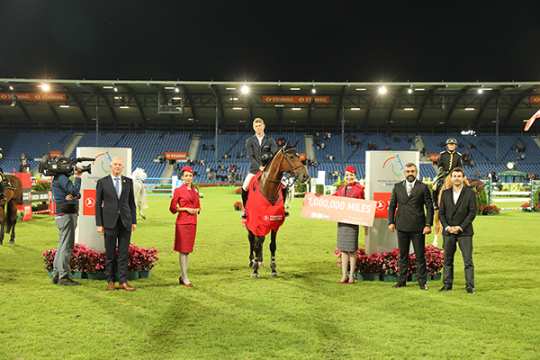