Max Giesinger stands in for Wincent Weiss: Party atmosphere at the Opening

Full house, amazing atmosphere, what an opening of the CHIO Aachen 2022! Around 200 horses and 500 extras plus acrobats, Olympic gold medallists, the world premiere of the CHIO songs by the “Höhner” and a German star singer, who was flown in “last-minute”, turned the official opening of the World Equestrian Festival into an exceptional evening in the Main Stadium.

After the shocking news, a huge success. After the star guest Wincent Weiss had to cancel at short notice due to a Corona infection, the organisers conjured up Max Giesinger onto the CHIO Aachen stage in time for the Opening Ceremony. Flown in especially from Berlin, the German chart stormer rocked the Main Stadium. Her performed four hits, kicking off with the song “Auf das, was da noch kommt” (A toast to what is still to come).

And indeed there was plenty more in store that evening. A world premiere right at the beginning: The CHIO Aachen finally has its own song. “In diesem Moment” (At this moment) is the name of the emotional ballad by the Höhner. And as soon as the musicians sang the chorus for the first time and unforgettable highlights of the CHIO Aachen flashed up on the big screens, the crowd of 37,500 spectators experienced a goose bump feeling in the Main Stadium at the Soers. A perfect prelude that was followed by a colourful pageant with over 200 horses and 500 extras, turning the 90-minute official opening of the World Equestrian Festival into a magical evening.

“Welcome to the Festival!” is the motto of the CHIO Aachen 2022, which is dedicated to the youth more than ever this year. And that was not only tangible on the stands, but also on the “Holy Grass”. Aspiring young riders from all disciplines, the youngest of them entered the huge ring on their hobby horses. In addition, the participants of the FEI Youth Equestrian Games, which are being staged for the first time at the Soers during the show. 30 talents from 30 nations, accompanied by children carrying flags, horses shrouded in the respective national colours – that was all that was necessary to reap in the world-famous welcome applause from the crowd. And the second goose bump moment came when the young dressage rider from the Ukraine, Diana Borovik, officially declared the CHIO Aachen and the FEI Youth Equestrian Games to be open.

The Olympic gold medallist and the SAP Cup record holder here in Aachen, Ingrid Klimke, took part in an extraordinary race against two “COURSE” jumpers from the “FlyGuys”, prior to which the entire troop had spun around in the skies of the Soers to fast melodies. The same distance, the same course – with and without a horse. A race that got the crowd roaring and which the two eventing stars narrowly lost. But that didn’t spoil the mood at all. Then, the next Olympic gold medallist entered the stadium: Isabell Werth – and together with her “soulmate” horse, Bella Rose, she ensured that the crowd experienced goose bump moment number 3. It was the last round through the Main Stadium for the 18-year-old mare, who will be retired from the sport in the course of a gala evening paying special tribute to her that is being held in the Deutsche Bank Stadium on Friday evening. And the 18-year-old mare enjoyed her standing ovations, while the sun slowly sank behind the characteristic arch of the NetAachen Stand. An emotional moment, when everyone including Max Giesinger wished Bella Rose “a wonderful retirement”. The 33-year-old singer brought the evening to a fantastic close with a rendition of “80 Million”. 37,500 people danced and celebrated and magnificent fireworks shot up into the night skies of Aachen. A crowning conclusion to the evening that whet everyone’s appetite for what is still to come at the CHIO Aachen 2022. 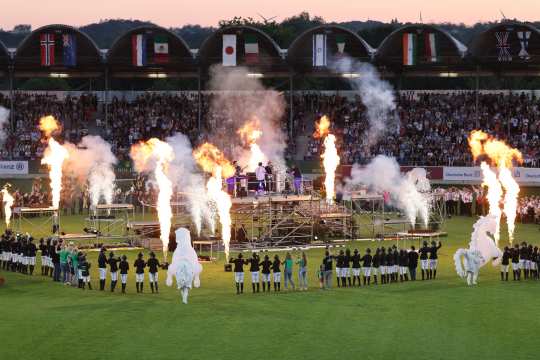