The last speed competition at the CHIO Aachen 2016, the SAP Prize, went to the Netherlands. The reigning team World and European Champion, Maikel van der Vleuten, had saddled the 10-year-old gelding, VDL Groep Quatro, for this class at the World Equestrian Festival and was rewarded for his trust with a clear round in 56.25 seconds, which meant the victory. Hans-Dieter Dreher came second with his mighty Holstein-bred stallion, Colore, with a clear round in 57.14 seconds. Ireland’s “young wild rider”, the not quite 21-year-old Bertram Allen, who is known for his fast rounds, was delighted at coming third with High Valley.

Further German riders, who were placed in the class, included Felix Haßmann with Horse Gym’s Balzaci in fourth place, the two German youngsters, Laura Klaphake (22) with Silverstone G and Maurice Tebbel (22) with Camilla PJ in eighth and ninth place respectively, followed by Philipp Weishaupt with Catokia, Marco Kutscher with Balermo and Christopher Kläsener with Heras van’t Verahof, who ranked tenth to twelfth. 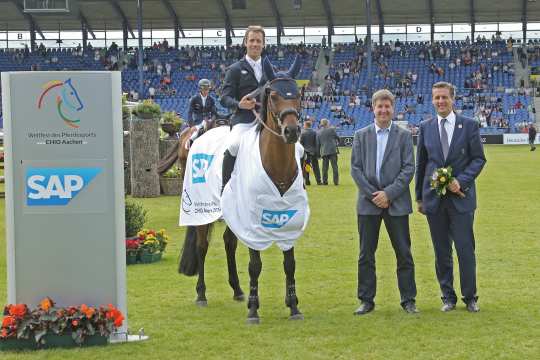