The name of the winner in the Sparkassen-Youngsters-Cup is very fitting “the Youth from Paradise”. Her rider prophesies a big future for her.

Before the Final in the Sparkassen-Youngsters-Cup had been decided, one had already tipped that no one would be able to match the time set by Lorenzo de Lucas and Jeunesse van‘t Paradijs – 39.46 seconds. And that was indeed the case, which was no real surprise for the rider from Italy: “She is a fantastic mare. I have been riding her now for almost a year. My first big show was the World Championship of the 7-year-olds, where we qualified for the final and in the final, I had one fence down. But I already knew then that she is exceptional. She has a lot of scope and is extremely careful.

The 8-year-old BWP mare inherited all of these positive attributes, she namely descends from one international winner after the next. Her sire Emerald is one of the top horses of the Dutch show-jumper, Harrie Smolders. The sire of her dam, Heartbreaker, was not only highly successful on the sporting circuit, but has also reached a legendary status among the stud stallions. The same applies for her great-grandfather, Nabab de Reve, to name but a few of her famous ancestors. With such a talent under the saddle, Luca’s tactics couldn’t go wrong: “I rode very fast because I knew that with the riders that were following me I had to go as fast as possible.”

After all 14 pairs had reached the jump-off of this important youngsters competition for young jumping horses at the CHIO Aachen 2017, nine of whom also remained clear in the jump-off. Second place went to Meredith Michaels-Beerbaum, who jumped clear in 40.26 with the eight-year-old Westphalian-bred gelding, Calle by Carell x Capitalist. She was also full of praise for her horse: “He is phenomenal. It’s a new horse for me, it’s only his fourth show with me. He wasn’t impressed by the arena or the lights. He jumped the course easily and didn’t have any problems with the big water jump. I really think he is ready to move up to jump bigger.” 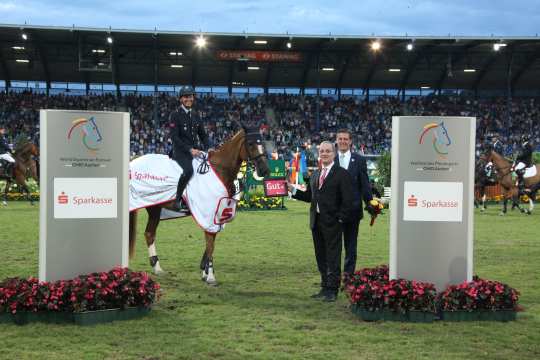