The four-legged aspiring young talents in the Sparkassen-Youngsters-Cup have rarely had such a superb setting at the CHIO Aachen as this year with the final staged under floodlights at “peak viewing time” on Saturday evening. One can assume that we will not only see Lorenzo de Luca’s winning mare in the Big Tour on the “holy grass” one day.

“I am totally amazed at her quality,” said an overjoyed, but somehow also overwhelmed, Lorenzo de Luca, after claiming the victory with the eight-year-old BWP-bred mare, Naomi van het Keizershof (by Cardento/For Pleasure). The pair sped round the course in 41.48 seconds.

The grey mare belongs to Lorenzo de Luca’s girlfriend, Jessica Springsteen, who bought her at an auction two years ago. “She hasn’t competed at many shows yet,” said de Luca. So, it is all the more impressive how superbly the grey mare flew through the floodlit jump-off of the Sparkassen-Youngsters-Cup!

David Will and his just seven-year-old Bavarian-bred Los Angeles son, Los Vochos, were close at their heels after crossing the finish line in 41.79 seconds. Third place also went to Germany, to Kendra Claricia Brinkop, who had also saddled a Belgian-bred horse, the eight-year-old Toulon son, Narcos by Smidshoeve. They completed the course in precisely 42 seconds.

Incidentally there was also a prize for the most successful rider of all three competitions – which was also Lorenzo de Luca – namely a foal of best show jumping pedigree, an Oldenburg-bred stallion by Cumano Alpha Z, born in 2021. For those familiar with the name Cumano – the sire of this foal is a clone of the Cumano, with whom Jos Lansink claimed the Show Jumping World Championship title in Aachen in 2006. 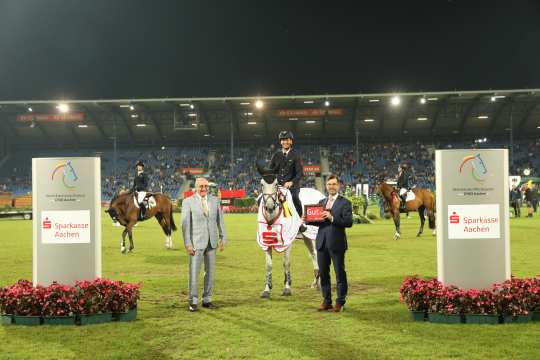