Looking into the crystal ball

When the best aspiring young riders meet up at the Aachen Youngstars it is always like taking a look into the crystal ball: Since this is where the future participants of the CHIO Aachen meet up, it is the stars of tomorrow, who ride into the dressage or jumping ring in the Albert-Vahle Arena. This weekend it was the top dressage riders and from Thursday onwards the show-jumpers will take to the ring.

The routes are short at the most famous showgrounds in the world. So, it is no wonder that most of the dressage riders take the opportunity to pop in next door and take a look at the Deutsche Bank Stadium. Because every year in the summer, the Werths, Dufours and Dujardins of this world compete in this impressive arena, which was especially built for the dressage sport. And let’s face it which aspiring young rider doesn’t dream of riding at the CHIO Aachen?

It is definitely Jana Lang’s dream. The 19-year-old dressage rider was highly successful over the past days in Aachen, so successful that she could hardly believe it herself and on her last centre line with her sports partner “Baron”, tears of happiness rolled down her cheek. Having travelled to Aachen as the current number 2 in the world ranking list of the Young Riders and as the present team European Champion, she actually pulled off the feat of winning all three classes in the Prize of the Hans-Peter Simons Family. It was thus obvious that the young rider from Alfeld, to the east of Nuremberg, thus also claimed the title of “Young Riders Champion 2022 presented by Uvex”, as the overall winner. And Jana Lang didn’t just experience the CHIO feeling because she rode to victory in Aachen – since like at the “World Equestrian Festival” there is also a winners’ board for the Youngstars, on which her name has now been eternalised for the second time in a row after already taking the victory in 2021.

The Austrian rider, Paul Jöbstl, a participant of the current Programme of Excellence of the CHIO Aachen CAMPUS also brought the Aachen Dressage Youngstars to a highly successful close with a fantastic performance in the concluding freestyle with his stallion Bodyguard. Trained down to a tee by the Head Coach, Isabell Werth, he came second behind Jana Lang. Moritz Treffinger, one of last year’s participants of the Programme of Excellence, finished in third place with Treffinger’s Superstition OLD.

Birgit Rosenberg, CHIO Aachen’s Head of Sport and member of the board of the Aachen-Laurensberger Rennverein e.V. (ALRV), organisers of the event, was clearly in high spirits and totally satisfied. She was especially pleased that the young talents were so impressed with the event: “All we see are happy faces, the atmosphere is top and the sport really is fantastic.” Rosenberg added that is remarkable to sense that Aachen is something very special for the youngest riders too and that the venue here at the Soers is simply exceptional. It is thus hardly surprising that Jana Lang also stated that “Aachen is simply the best show of the year for us.” And for a change reference wasn’t being made to the CHIO. 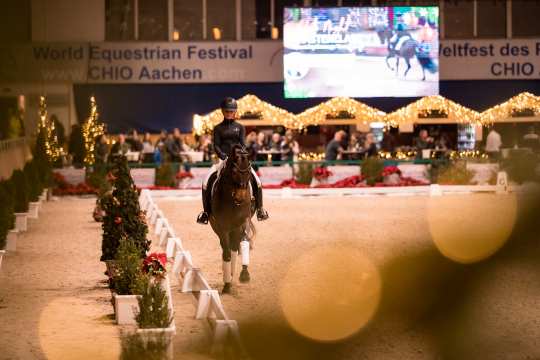 Top sport in an atmospheric setting - that's the Aachen Youngstars.

Taking part at the CHIO Aachen is also one of Amber Hennes’ biggest dreams. The young dressage rider from Aarschot near Brussels in Belgium won the Children’s classification (up to 14 years old, on horses). Despite her young years, she is already firmly intent on competing in the Deutsche Bank Stadium one day: “My big dream is to compete at the CHIO Aachen, of course!” The chances are very good for the highly-talented pupil, who ultimately notched up a score of 81.542 percent on Sunday with her gelding, Allegro. A new personal best, her second victory in the Prize of federal promotion of children dressage sports and on top of that also the coveted sash for the title of Children’s Champion 2022 presented by UVEX. What’s more, in her last year in this age classification, “I very much hope I am able to return next year to compete in the Ponys or Juniors age group,” she commented.

Carolina Miesner from Scheeßel in Lower Saxony, made her debut performance in Aachen in the WOTAX Prize. And she was able to snatch the victory in the Juniors classification straight off. She is over the moon about the show: “It is simply awesome here. The festively decorated hall and the ground conditions are unbelievable. It has always been my dream to ride here one day.” Her first appearance at the Aachen Dressage Youngstars could hardly have gone better. Especially since she also secured herself the title of the Junior Champion 2022 presented by UVEX as the icing on the cake.

That is a record! Nobody has ever managed to eternalise their name on the winners’ board of the Aachen Dressage Youngstars three times so far. Until today. Then came Rose Oatley and her pony, Daddy Moon. Hands down and with the next hat-trick, because she won all three classes, the ultimate round, namely the Prize of BFT Cognos GmbH, on the fantastic score of 83.517 percent. Triple victory at the Youngstars 2022 and after 2019 and 2021 she was crowned Indoor Champion for the third time – wow! “I am super proud of Moony and of us as a team that we have pulled it off here again,” stated Rose Oatley. Riding Tovdal’s Golden Future Imperial, Mia Allegra Lohe finished behind Rose Oatley in second place on a score of exactly 79 percent. Scoring 77.467 percent, Julie Sofie Schmitz-Heinen and Chilly Morning WE came third, which meant it was also a German hat-trick on the winner’s podium.

The Aachen Youngstars – dressage this week and jumping next week – form an important part of the youth concept of the organisers, the ALRV. “Promoting and supporting young talented riders and enabling them to compete at professionally organised shows is a matter close to our hearts,” explained Birgit Rosenberg. She is already looking ahead to the future: “It was fantastic and now we are looking forward to the Aachen Jumping Youngstars, which starts on Thursday.”