One didn’t have to ask Isabell Werth how she felt after winning the Lindt Prize, the Grand Prix Spéciale at the CHIO Aachen 2018 with a score of over 80 percen. One could see it.

You’d think if someone had already won 595 Grand Prix competitions at national and international level, they had got used to it. But Isabell Werth certainly didn’t give that impression today when she left the arena with Bella Rose after her receiving 80.149 percent for her ride. “I am of course overjoyed!”, the most successful dressage ride of all time beamed and added half jokingly: “If the jockey can now get the flying-changes right…“. Their performance was namely not totally free of mistakes. The fact that they were still awarded over 80 percent, was primarily due to the outstanding piaffes, passage and half-passes. There is hardly room for improvement there which was reflected in the scores she was awarded for these exercises. Werth hit the nail on the head: “It is incredible how this horse fights with you! Of course, there was a bit of tension in the flying-changes today. But it is extraordinary that she can cope with this atmosphere here so well after four years!” Everything else is just a question of strength and gaining more competition experience, she had added.

Jessica von Bredow-Werndl had plenty of reason for joy too, she namely came second with her KWPN mare, Zaire-E, her “ballerina”, in spite of a few small errors – among others striking off in canter after the passage instead of the extended trot. The mare had been very distracted by the atmosphere in the Deutsche Bank Stadium in the Grand Prix of the HAVENS Pferdefutter Prize, but today she seemed to feel comfortable and put in a solid performance that was rewarded with a score of 72.702 percent.

Two pairs finished in third place: The Danish rider Betina Jæger with the Hanoverian-bred Mane Stream Belstaff and Steffen Peters (USA) with Suppenkasper, a KWPN-bred gelding that was trained by Helen Langehanenberg. The horse went to Steffen Peters in California almost exactly a year ago. Both pairs finished on a score of 71.340 percent. 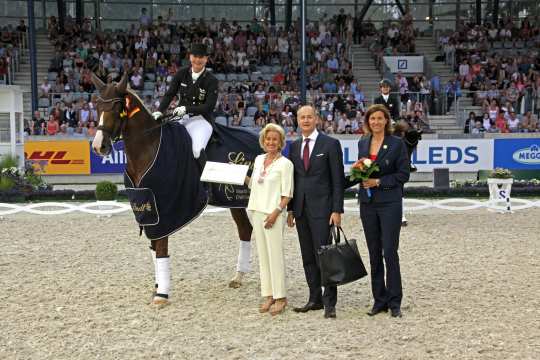