“Riding here is always especially nerve-racking. It is the biggest and probably best show in the world. So, one does one’s best to put in a top performance,” commented Sönke Rothenberger. And that was precisely what he and his KWPN-bred gelding, Cosmo, did today in the Grand Prix Special, the Lindt-Prize. The fact that they were slightly reserved at the start of the test was not because they were feeling insecure, in fact the exact opposite was the case: “The whole weekend I have had the feeling that Cosmo felt very comfortable in the arena. I now succeed in letting the energy that he brings with him from home flow into the competition the right way.”

That was clearly perceivable. Even if Cosmo took the odd furtive look at the crowd, he remained focused and danced through the dressage arena with his ears pricked forward. “That is dressage,” the spectators murmured. The judges were of the same opinion: 82.213 percent speaks for itself. And Sönke Rothenberger conviction was confirmed once again: “I probably have the best horse in the world. If I don’t make any mistakes, nobody can beat us.”

And he is right too. Although his biggest rival, the dressage queen, Isabell Werth, had saddled last year’s winner in the Deutsche Bank Prize, Emilio, for the CDI4* Tour, they weren’t able to top his performance, whereby they did make quite a few expensive mistakes, both in the two-tempi and one-tempi flying changes. The latter was an accident after Emilio stumbled on the diagonal line. Furthermore, his contact wasn’t constant in the first piaffe, all of which ultimately resulted in an overall score of 76.681 percent.

Third place went to Jessica von Bredow-Werndl with her elegant, KWPN-bred mare, Zaire-E by Son de Niro. Here too, mistakes in the one-tempi changes cost the pair valuable points. Two of the five judges had placed the duo second. However, after achieving an overall score of 76.191 percent, Bredow-Werndl and Zaire-E finished third. 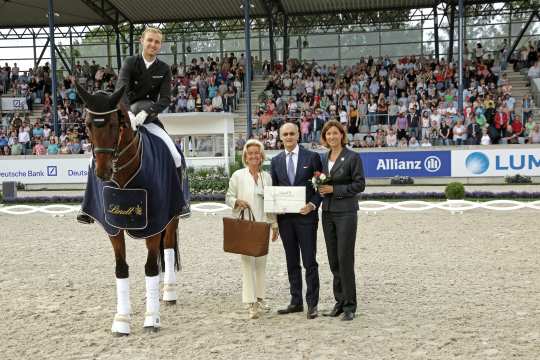