Legendary hits in the legendary stadium

Musical revue by the Grenzlandtheater Aachen

What an extraordinary venue for a musical revue: In August, world-famous melodies will ring out in the Main Stadium of the CHIO Aachen, where otherwise the world-famous equestrian show is at home. The project is a cooperation between the Grenzlandtheater Aachen and the CHIO Aachen.

And even the title is based on the CHIO Aachen: Instead of being called the “Mercedes-Benz Nations Cup”, from August 14th-16th, the name of the game is: “Prize of the IntoNations”. Hits from the Rocky Horror Show, the Cage of Madwomen or My Fair Lady, in addition to songs that have written pop and rock history: Good spirits are guaranteed on these evenings (starting at 8.30 p.m. respectively). The live music will be played by the pianist Gero Körner and a band, Marga Render is responsible for the choreography. Tickets are available from Thursday onwards at www.grenzlandtheater.de.

Uwe Brandt, Artistic Director of the Grenzlandtheater promises, “A big ensemble” with musicians and dancers, who perform throughout Europe.” The Main Stadium as the venue of this show sprang to mind immediately for Brandt, since he has been supporting the CHIO team for five years already in his capacity as Director of the CHIO Aachen Opening Ceremony. “We can bring many people together here in the open air and at the same observe all of the distance regulations.” There will be two empty seats in-between two vacated seats. Dr. Tim Grüttemeier, in his capacity as Council of the City Region is automatically Chairman of the Advisory Board of the Theatre, is delighted “that culture is possible again” – albeit in new, different formats. The format of the musical revue has also convinced the Aachen-Laurensberger Rennverein e.V. (ALRV), organisers of the CHIO, “as Uwe Brandt came to us with the idea, we said yes immediately,” commented Carl Meulenbergh, President of the ALRV. And the Chairman, Frank Kemperman, added: “We are missing the wonderful atmosphere that normally prevails in the Main Stadium.” According to Kemperman the evenings organised by the Grenzlandtheater will conjure up a bit of this unique atmosphere.

The show grounds are very suitable. The spectators can reach the grounds via the Soerser Weg, where there are sufficient parking spots, reported Kemperman. A large stage will be erected in front of the Mercedes-Benz, the wide field of the stadium behind it will serve as the setting for these summer evenings. The tickets will cost 25 Euro plus an advance booking charge. “We have consciously kept the price down to enable culture for everyone again,” commented Brandt. However, in spite of the large amount of space the Mercedes-Benz Stand offers, a maximum of 700 tickets will be available per evening. The advance sales (via www.grenzlandtheater.de) start on July 2nd.

Only one question remains open: Brandt and Kemperman didn’t want reveal whether a horse will be playing a role or not.

Tickets are available at www.grenzlandtheater.de 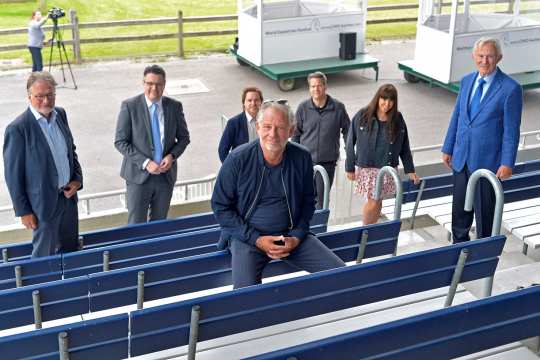