Late Night with Christoph Hess at the Aachen Dressage Youngstars

Dressage fans should note this date down in their diaries: Next Saturday on November 26, a Late Night with the trainer and judge Christopher Hess is taking place in the festively decorated Albert-Vahle Arena during the Aachen Dressage Youngstars. The evening kicks off at 8.15 p.m. Admission is free of charge.

The Aachen Dressage Youngstars traditionally bring the season to an exciting close for the best aspiring, young dressage riders. The Late Night with Christoph Hess on Saturday evening is a true highlight of the first-class sports competitions in four age groups. The trainer, who is well-known for his correct and horse-friendly riding style, held various executive positions at the Deutsche Reiterliche Vereinigung (FN/German Equestrian Federation) as well as at the German Olympic Committee for Riding (DOKR) for almost four decades. And Christoph Hess has also remained loyal to the FN after retiring in the year 2016, serving as their Training Ambassador. And the 71-year-old is travelling to the Albert-Vahle Arena on November 26, in precisely this function, namely to carry the fundamentals of German riding out into the world. On this evening, in three training sessions he will convey the essentials on the way to advanced level dressage and how special exercises can be learned and refined.

And his pupils couldn’t be more famous on this evening. Among others the Team European Champion of the Children, Alessa Marie Maass, is on board as well as Moritz Treffinger, a former member of the CHIO Aachen CAMPUS Programme of Excellence, who was recently awarded the Golden Riding Badge. In intensive, individual sessions lasting 30 minutes each, Christoph Hess will work with the young riders and touch upon many issues of basic training, practising and improving exercises of different training levels. As a long-standing international dressage and eventing judge, Christoph Hess is familiar, like no other, with rider problems, but also at recognising weakness of the horses and at working on solutions together with the horse and rider. Throughout the evening, the expert will be glad to answer questions from the audience. This promises to offer great support for possible difficulties that may arise while training with one’s own horse at home. Admission is free of charge. 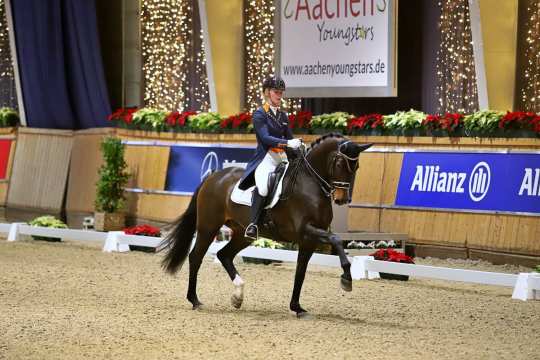