Already after the Grand Prix, the Prize of the Tesch Family, the first competition in the Lambertz Nations’ Cup at the CHIO Aachen 2016, it didn’t look like anyone had a chance of beating the German dressage riders this year. In the MEGGLE Prize, the second part of the Lambertz Nations’ Cup, which comprised of the Grand Prix and the Grand Prix Special this time, they impressively confirmed their dominance at this year’s World Equestrian Festival. With a total score of 492.598 points, Kristina Bröring-Sprehe with Desperados, Sönke Rothenberger with Cosmo, Dorothee Schneider with Showtime and Isabell Werth with  Weihegold OLD clearly asserted themselves against the team from the USA, who finished on a total score of 437. 139 points. Third place went to Denmark (214.242).

After the Lambertz Nations’ Cup, Germany’s Chef d’Equipe, Klaus Roeser announced that the four CHIO riders will also represent Germany at the Olympic Games in Rio de Janeiro. Hubertus Schmidt will be accompanying them as the reserve rider with Imperio, who won the CDI Grand Prix on Wednesday, the HAVENS Horsefeed Prize.

If things go in Rio like they are here in Aachen, the Germans not only have good chances in the team classification, but also in the individual classification. Kristina Bröring-Sprehe is already the number one in the world ranking list. And her result today was at least medal-worthy. After a fantastic round with her black stallion, Desperados, the judges awarded her a score of 83.725 percent – although she even made two mistakes in the canter tour, which cost her points. So, there is still even room for improvement.

An overjoyed Dorothee Schneider came second (81.902 percent), whose gelding Showtime seems to be gaining confidence from show to show – even amid the impressive setting of the sold-out Deutsche Bank Stadium, which had intimidated Showtime on the first day a bit. Her secret for success “He trusts me more and more. He has never been in a stadium like that before. But it is as though he asks me when he is insecure: ‘Can I do this?’ And I tell him, ‘Yes, you can!’ and then he does it.”

The winners of Thursday’s Grand Prix, the Prize of the Tesch Family, Isabell Werth with Weihegold, had to make do with third place today (80.686). Of all things Weihegold’s best exercise, the piaffe, didn’t really go right today. Whereby, the many-time Olympic gold medallist, World and European Champion admitted that it was her mistake: “I did something different to usual in the preparation and that unsettled Weihegold a bit. But it is important that things like that happen, so we can learn from them!”

The fourth team rider, the youngster Sönke Rothenberger (21) with the just 9-year-old Cosmo, finished fifth. “Cosmo was a little matt in canter, and the mistakes resulted from that. They were awarded a score of 76.412 percent by the judges. The rider from the USA, Steffen Peters, came fourth with Legolas as the only foreign rider among the ranks of the Germans.

A further horse of the US team, Katherine Bateson Chandler’s Alcazar, had to be taken to the clinic with a life-endangering case of colic. He had to be operated on but is recovering now. The rider was extremely grateful to the team in Aachen, who looked after her horse. She will stay in Germany until he is fit for transport. Then she will head home. 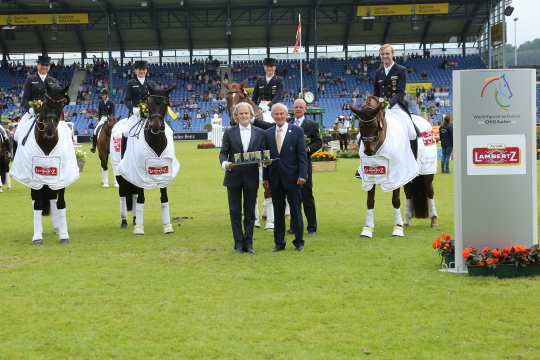