Lamaze does it again in the Prize of North Rhine-Westphalia

What a week for Canada’s Olympic gold medallist, Eric Lamaze and his Hanoverian mare, Fine Lady! First of all they won the Turkish-Airlines Prize of Europe on Wednesday, then they rode to victory in the Prize North Rhine-Westphalia. And at what a speed! In the second round of the jumping competition, the pair were almost four seconds faster than the rest of the field again. However, as far as the Rolex Grand Prix is concerned, his fellow competitors can breathe out again. Fine Lady is already on the way to Rio. What Lamaze couldn’t confirm on Wednesday after his victory, is now official: He will be riding Fine Lady at the Olympic Games. He would never have imagined that himself when he took over the mare from the German squad member, Holger Wulschner, in 2014: “We actually thought she was a good reserve horse for me for 1.50 metre speed competitions. But then I jumped her in the bigger classes now and again as well. And whatever we demanded from her, she delivered. I don’t know if one can call it scope. But she really is bold! And when she has the right ground speed, she can jump everything.” The Grand Prix of Aachen, that is like an Olympic Games class in itself, added Lamaze. That would be too much for the mare before Rio.

The runner-up in the Prize of North Rhine-Westphalia is not sure whether he is going to compete in the Rolex Grand Prix on Sunday either. Albeit for completely different reasons. Because this is the first year that the just 22-year-old Maurice is competing against the “big riders” at the Soers. In the winter he still took part at the Salut Festival in the Albert-Vahle Arena, the quasi CHIO for aspiring young riders. Maurice already came second in the STAWAG Opening Jumping Competition on Tuesday, after which he had explained that being allowed to compete in Aachen was a dream come true for him. Can that be topped? Yes: Maurice left diverse renowned names of the international show jumping elite behind him today, first and foremost the two German Olympic Games candidates Ludger Beerbaum with Chiara (third place) and Marcus Ehning with Cornado NRW (fourth place).

Incidentally, Maurice’s horse, the stallion Chacco’s Son, was actually also considered to be more suitable for speed competitions. “We bought the stallion as a foal. I rode him in jumping classes for young horses. We took part in the German Championships for Young Horses three times. But back then he wasn’t that easy to ride. It wasn’t until two years ago, when he was seven that things started to go click. At the time my father said (René Tebbel, many-time German Champion, who rides for the Ukraine in the meantime, editor’s note), he would certainly make a good speed horse.” Chacco’s Son is fast indeed. But he can also jump high, as he proved today. Maurice will now consult with his father and the National Coach, whether he should compete in the Rolex Grand Prix on Sunday or not: “I certainly would like to…” 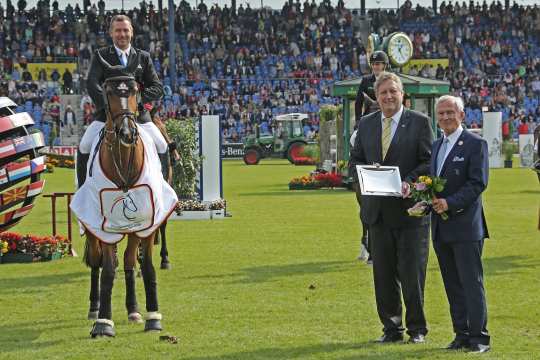