Klaus Peters receives the “Prize of the City of Aachen”

The name Klaus Peters has been closely associated with the CHIO Aachen for many decades. The businessman from Aachen has namely taken on many functions and positions in connection with the largest equestrian sport event in the world over this period of time. Peters was distinguished for his untiring commitment with the “Prize of the City of Aachen” on Thursday evening in the Main Stadium during the CHIO Aachen 2016 shortly before the Mercedes-Benz Nations’ Cup started. The award, which has been conferred since 1995 during the CHIO Aachen for special services to the equestrian show at the Soers, was presented to him by Marcel Philipp, Lord Mayor of the City of Aachen and Carl Meulenbergh, President of the Aachen-Laurensberger Rennverein e. V.

Klaus Peters has been a member of the Aachen-Laurensberger Rennverein e. V. (ALRV) since 1970, which he also supported from 1993 to 2008 as member of the Supervisory Board in his capacity as Vice-President. When he stepped down from this honorary post, he was unanimously appointed as an honorary member at the general annual meeting. Klaus Peters also demonstrated his voluntary commitment in the run-up to the FEI World Equestrian Games Aachen 2006 by contributing his extensive know-how as a member of the Construction Committee.

The family business that he ran up until 2011 has already been supporting the ALRV and its shows since 1954. But not only that: In addition to the CHIO Museum, which is supported by the “NEUMAN & ESSER Foundation of the Peters Family”, the 78-year-old is particularly involved in the youth work of the ALRV and the Salut Festival

Peters joins the list of award winners of the coveted prize, which ranges from Hans-Heinrich Isenbart through to the “loyal crowd of the World Equestrian Festival, CHIO Aachen”. 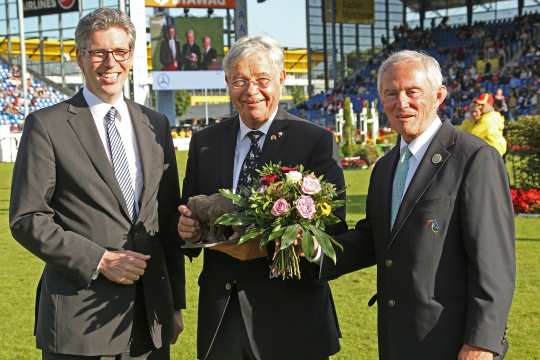