Janika Derks – no goal but a concrete plan

She didn’t start competing in the ladies competitions until 2016, and already winner of the Prize of Sparkasse at the CHIO Aachen in 2017: Vaulter Janika Derks.

Whereby the 27-year-old hadn’t actually set herself a goal. After the first of the two disciplines in the Prize of Sparkasse 2017, Janika Derks had stated modestly: “I am not aiming to achieve a certain placing. My goal is that I am satisfied with myself and I will be happy if the score reflects my performance.” One day later a dream came true: A victory in Aachen, the show that she and her colleagues look forward to the whole year.

“The crowd, organisation, atmosphere – everything is top here!” commented Derks. Which makes it all the more enjoyable when the sporting performance goes well: “Yes, my feeling and the judges’ score were in sync, I am happy.” Today, Derks presented “The life of a cat” – that is her freestyle motto – on Auxerre, lunged by Elisabeth Simon. She certainly did justice to the theme – lolling around on the horse’s back as if she never does anything else and she displayed cat-like skill in her acrobatic moves, landing gently and accurately as if it were child’s play. The freestyle was a feast for the eyes (8.227), even if it wasn’t the winning round.

Because on a score of 8.671 one of her fellow competitors topped her performance: Sarah Kay on Sir Valentin with Dina Menke as the lunger. The vaulter from Schleswig-Holstein had set her aims high today: “The first two competitions didn’t go as well as planned. So, I wanted to give everything today!” Kay is well-known for her nerves of steel. Where others give up, she can go that extra mile. She performed a super freestyle, perfectly in line with the theme “Smaug”, the dragon out of the cinema film “The Hobbit”. However, her victory in the freestyle didn’t enable her to move further up in the overall classification, ultimately Sarah Kay finished fifth.

Second place in the Prize of Sparkasse went to Derks‘ eternal rival this weekend: The Italian vaulter, Anna Cavallaro with Monaco Franze lunged by Nelson Vidoni. The World Cup winner mimed a wolf, but after wobbling slightly on landing after a jump, she was no longer a danger to the leading pair. Added together, fifth place in the freestyle, the third best compulsory test and the victory in the technical test resulted in a final score of 8.047.

The remaining German vaulters followed the Italian acrobat in the rankings. In addition to Sarah Kay in fifth place, last year’s winner Kristina Boe came third and the silver medallist of the 2015 European Championships, Corinna Knauf, finished fourth. Kristina Boe’s freestyle routine on Don de la Mar (Lunger: Winnie Schlüter) was full of difficult moves, such as for example a jump where she turned completely around her own axis. One of the judges placed Boe first in the technical score, the other judge put her in fourth place. Together with the artistic score and the score for the horse, this meant third place in the freestyle on a score of 8.629 and also third place in the overall classification. Corinna Knauf and her sister and trainer Alexandra Knauf gave each other a high five after the last dismount from their trusted partner, Fabiola. Well done! But in view of the tough competition in Aachen, Knauf had to make do with a score of 8.348 and sixth place. She ranked fourth in the individual classification. 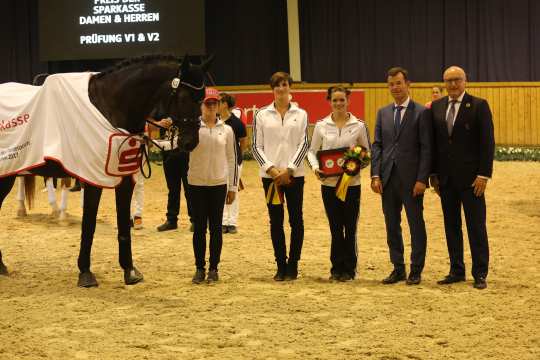