It’s (L)amazing! Eric Lamaze repeats his victory in the Turkish Airlines-Prize of Europe

When Canada’s Eric Lamaze and his equally small and nimble Hanoverian-bred mare, Fine Lady, are in the jump-off, his fellow competitors have to keep on their toes. This was the case again today when the pair repeated last year’s victory in the Turkish Airlines-Prize of Europe. Despite exceptional conditions.

Petrus showed the CHIO Aachen no mercy today. Gale warnings and a storm that quite literally hit the Soers in a flash, led to all competitions having to be interrupted, including also the Turkish Airlines-Prize of Europe. Despite this, 20 pairs still managed to reach the jump-off. Hence 19 pairs, tried to stop last year’s winners, Eric Lamaze and Fine Lady, from claiming their second victory in the first highlight of the CHIO Aachen 201. In vain. Once again in 2017, the pair who claimed the bronze medal at the Olympic Games in 2016 opened their show with a victory. Lamaze and Fine Lady crossed the finish line clear in a time of 42.97 seconds – a time that it was possible to beat, as the Spanish rider Sergio Alvarez Moya and his horse Arrayan demonstrated, namely the pair galloped over the finish line in 42.27 seconds, unfortunately they had knocked over a pole though. That didn’t happen to Fine Lady. The small mare seems to double in size when she enters the ring. Where other horses make up time with their huge canter strides or lose time because they haven’t got a big stride, she beats the clock with her agility. Last year, Eric Lamaze opted not to competing with the mare in the Grand Prix because the Olympic Games were imminent. However, this year he has set his course for Sunday’s highlight: “I already said to myself before the competition: If Fine Lady jumps well today, I will ride her on Sunday in the Rolex Grand Prix.” And she certainly did go well.

That definitely wasn’t easy today, as Ludger Beerbaum, who ranked second in the class emphasised. He was indeed lucky himself. The weather remained calm during his rounds with the Holsteiner mare, Chiara. Other fellow colleagues weren’t as fortunate: “The sky had gone very dark quite a while before. That scares the horses! And then the noise the hooves made in the wet grass after the rain. That is particularly difficult for younger horses. If it hadn’t been for the weather, I am sure we may have had 23/24 clears.” Beerbaum also stressed that nobody can do anything about such conditions and that everyone had done everything possible to protect the horses, riders and spectators.

Eric Lamaze reached the finish line a whole second faster than Ludger Beerbaum, whereas only one hundredths of second separated him and the Irish rider, Bertram Allen, who came third with Molly Malone. Allen took it with humour though, he hadn’t realised it was so close. He praised his horse, the 13-year-old Kannan daughter, whom he said he had already won a few Grand Prix with even in such poor weather conditions as today.

20 pairs in the jump-off – that also raised a few questions. Eric Lamaze’s explanation seemed plausible enough: “It was the opening qualifier for the Major, so it was to be expected that it would be difficult. But the best riders in the world are here, so there are always plenty of clear rounds. It was a difficult job for Frank Rothenberger to build a course that resulted in the right number of clear rounds, however it was a very fair course.” 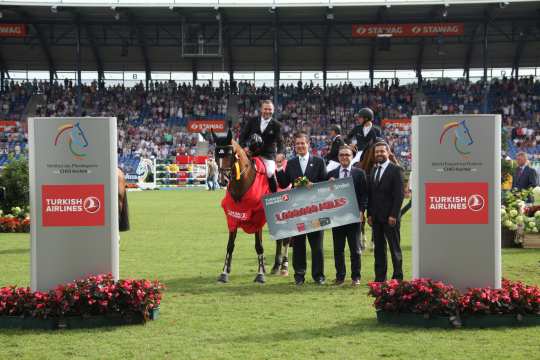