It is Major time on Sunday

The “CP International presented by Rolex” attracts the best show-jumpers in the world to Spruce Meadows in Canada.

One of the most magnificent showgrounds in the world can be found in Canada, at the foot of the Rocky Mountains and not far from the fantastic Banff National Park. On Sunday, the third Major of the year will lure the best show-jumpers in the world to Spruce Meadows. As part of the Rolex Grand Slam of Show Jumping, the CSIO Spruce Meadows ‘Masters‘ in Calgary is one of the highlights of the international jumping season. The rider that wins the “CP International, presented by Rolex” in the legendary International Ring on September 11th, will go down in history as the winner of a Major.

In 2015, history was written in Spruce Meadows when Scott Brash (GBR) won the third Major in succession and thus also the Rolex Grand Slam of Show Jumping. The next sensation followed one year later: In 2016, Scott Brash once again steered his horse to victory in the Grand Prix, this time not with his Grand Slam partner, Hello Sanctos, but with Ursula XII. In 2017, it was Philipp Weishaupt (GER), who jumped to the top in the CP ‘International’, presented by Rolex with his exceptional horse, LB Convall. In 2018, Sameh El Dahan (EGY), left the entire world elite of the jumping sport behind him with his mare, Suma’s Zorro. The following year, Spruce Meadows became the scene of a sensation: Beezie Madden and her outstanding horse, Darry Lou, claimed the victory in a Major. The US American rider thus became the first female contender for the Rolex Grand Slam of Show Jumping. After the forced break in 2020 due to COVID-19, last year the Swiss show-jumper Steve Guerdat succeeded in topping the ranks of the class with his scopey gelding, Venard de Cerisy.

This year all eyes will be cast on Gerrit Nieberg (GER) in the ring. After his totally unexpected victory in the Rolex Grand Prix at the CHIO Aachen, the 29-year-old now has the opportunity to continue his personal Rolex Grand Slam of Show Jumping journey. If the young, German rider asserts himself against the crème de la crème of the sport in the Grand Prix in Calgary, he will travel to the CHI Geneva in December to claim the Grand Slam title.

But Gerrit Nieberg is not the only one, as the focus will also be on Martin Fuchs from Switzerland, who triumphed in the Rolex Grand Prix in Geneva in December 2021. As such, the number two in the world ranking also has the opportunity to bring his personal Grand Slam cycle to an end with a further victory and collect a 250,000-Euro bonus.

The challenge of riding to victory in the CP International, presented by Rolex, is certainly not going to be an easy feat for the current Grand Slam participants, because they will be facing extremely strong competition at the CSIO Spruce Meadows ‘Masters‘ 2022: As is customary for a Grand Slam Major, the top riders from the strongest equestrian nations have already confirmed their participation and each of them will try their very hardest to assert themselves against their fellow athletes.

The “CP International presented by Rolex” starts at 12 noon on Sunday (local time = 8 p.m. in Aachen). It will be streamed live among others on the website of the Rolex Grand Slam of Show Jumping. 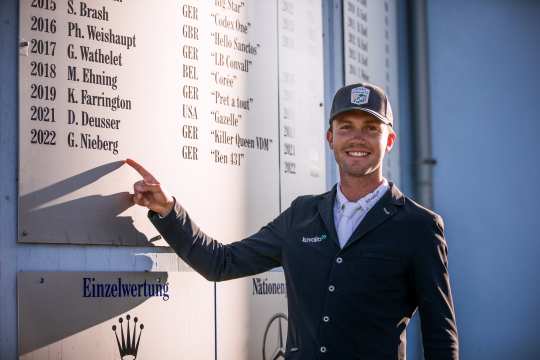 Gerrit Nieberg has already made it onto the legendary Winner’s Board at the CHIO Aachen. Can we look forward to the next coup in Spruce Meadows? Photo: CHIO Aachen/ Franziska Sack