Isabell Werth’s invitation to dance in the Deutsche Bank Prize

The spectators clapped in rhythm, the horse owner, Madeleine Winter-Schulze, wiped a stolen tear from her eye and Isabell Werth clenched her fist in triumph. She celebrated an amazing freestyle routine with Emilio in the Grand Finale of the CHIO Aachen 2018 in the Deutsche Bank Prize.

After today’s freestyle, Isabell Werth definitely goes down in CHIO history as the Queen of the Deutsche Bank Stadium. Today’s triumph is the twelfth in her career in the Deutsche Bank Prize, Emilio the fourth horse that she had steered to victory in Aachen. Werth left the dressage arena with the 12-year-old Westphalian-bred Ehrenpreis son on a personal best score of 87.625 percent. Second place went to the US American rider, Kasey Perry-Glass with her Danish-bred Goerklintgaards Dublet by Diamond Hit on a score of 85.205, followed by her fellow countrywoman, Laura Graves with Verdades by Florett As (85.085).

After a mistake that cost valuable points, the Danish rider Cathrine Dufour ranked fourth with Cassidy (84.835). Helen Langehanenberg delivered the second best German result with Damsey (5th/82.575). Dorothee Schneider and Sammy Davis. Jr, finished seventh (81.295). Sixth place was claimed by the Danish rider Daniel Bachmann Andersen with Blue Hors Zack, who was the only rider in the freestyle test to achieve a score of 10 for the degree of difficulty – which makes up one tenth of the overall score (82.195).

Names, scores and nationalities confirm Isabell Werth’s conclusion of the days at the Soers: “That was an exciting week for us all!” A week with victories and defeats for favourites, surprising victories and comebacks, which began with a below average performance in the Grand Prix for Werth, continued with a triumph in the Spéciale and climaxed with the best ever freestyle routine with Emilio in their career. Emilio seemed to gain confidence and courage from movement to movement and danced in harmony to music by Beethoven, Puccini and Verdi, which in spite of it being 30 degrees in the shade caused a goose bump shiver to crawl down one’s spine. As the bay horse passaged down the final centre line, the crowd started clapping to the music, Isabell Werth lifted one hand to greet and rode the last few metres of the salute one-handed. She had hardly come to a halt before thunderous applause broke out. The horse owner Madeleine Winter-Schulze wiped a tear from her eye and Isabell Werth could hardly praise Emilio enough. What a ride. So light, so harmonious, that’s what dressage is about!

Up until now Laura Graves was seen to be Werth’s most serious rival. And indeed the rider from the USA won the Grand Prix with Verdades. However, in the Spéciale, which she managed to beat Werth in last year, her horse spooked at a camera and totally lost the thread. Today, the KWPN-gelding was back to his usual top form. But that last touch of charisma lacked today that decides between victory and defeat.

In any case, Graves‘ training colleague, Kasey Perry-Glass – both train with the former Olympic participant  Debbie McDonald – succeeded in beating the rider, who has already notched up a fourth place at the Olympic Games, for the first time ever, as well as all other German riders apart from Werth. That is definitely a statement too!

Kasey Perry-Glass competed in Europe for the first time in 2016 and caused a stir with her elegant dark bay horse. However, the performances of the pair remained under expectations in 2017, here in Aachen too. Afterwards the rider gave her sports partner a break. “He needed it and so did I. We changed the training around, didn’t drill the movements as much and made the training more diversified. And it paid off because he came back stronger.” Indeed – it was a joy to watch the two of them celebrate their freestyle to the film music from “Lord of the Rings.” In fact, the entire competition was a joy to watch. A worthy finale to the dressage competitions at the World Equestrian Festival! 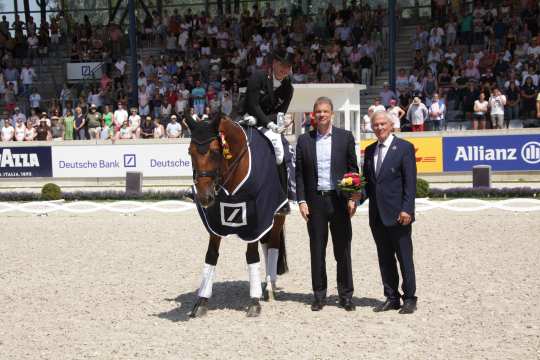 Isabell Werth is congratulated by Christian Sewing, chairman of the board Deutsche Bank AG and Carl Meulenbergh, President of the Aachen-Laurensberger Rennverein e.V. (right).