Goose-bump alarm at the Aachen Soers! One highlight followed the next in the Deutsche Bank Prize 2019. But the very best came at the end!

And once again this proved to be Isabell Werth. For the 13th time in total and for the third time in succession, she won the Deutsche Bank Prize at the CHIO Aachen. What’s more, with a different horse every time – Weihegold, Emilio and today Bella Rose. 90.450 percent, a personal record was the exceptional mare’s birthday present to her rider, who celebrated her 50th birthday at the Soers. The queen of dressage was congratulated with standing ovations and a “Happy Birthday” repertoire sung by 6,500 dressage fans. On the last centre line, the spectators clapped to the rhythm of the passage and finally broke out into thunderous applause. And Bella Rose? She raised her head, took a look round as if acknowledging the fact that homage was being paid to her just as much as to her rider.

“It’s Showtime“ – that is how the freestyle of Dorothee Schneider and her Sandro Hit son, who carries the same name, begins. Then, both set off to the Queen medley, the main theme of which is “The Show must go on”. No other music could suit this wonderful dancer better. The pair already scored a personal best in the Spécial yesterday. Today in the freestyle they did it again: Second place with a score of 89.660 percent. A visibly emotional German Champion, Dorothee Schneider: “The hairs on my neck were standing up while I was riding this freestyle in Aachen with this horse…” That said it all. And a whole stadium was delighted at experiencing the best Showtime, there’d ever been.

If there is a pair that personifies lightness, then it has to be Jessica von Bredow-Werndl and her Trakehner mare, Dalera BB. The music from the film “La La Land” perfect for the light-footedness and ease of this Easy Game daughter and Bredow-Werndl with her perfect seat, who finished third today on a score of 87.595 percent. The last minutes of the choreography with the extended trot, passage and piaffe, perfectly coordinated to the music, were as rhythmic as a metronome – one could have even awarded the pair 11s for the exercises. The Chief Judge, Dr. Evi Eisenhardt, commented as follows about the performances on Sunday morning: “Believe me not only the spectators had goose-bumps. We did too!”

Eight pairs with a score over 80 percent – that shows how high the level was in the Deutsche Bank Prize in 2019. 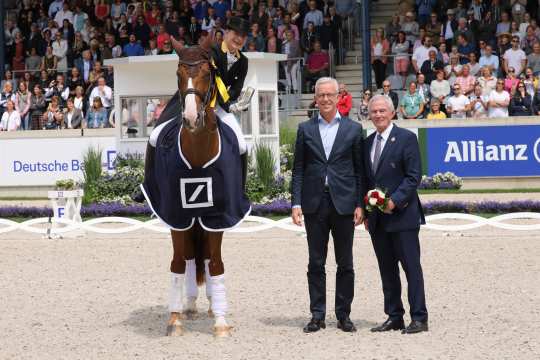 Isabell Werth is congratulated by Karl von Rohr, Deputy Chairman of the Executive Board of Deutsche Bank, and Carl Meulenbergh. President of the Aachen-Laurensberger e.V.