It was an extremely successful day for Ireland’s Cian O‘Connor at the CHIO Aachen 2017! After coming fourth in the Turkish Airlines-Prize of Europe, he jumped to victory in this evening’s jumping competition in two phases, the Prize of StädteRegion Aachen.

“I was lucky that no one beat my time,” was the sober résumé of Cian O‘Connor after his victory in the Prize of StädteRegion Aachen, after jumping clear in 35.39 seconds. His partner in success was the ten-year-old KWPN gelding, Callisto by Quasimodo Z, a horse that according to the Irish rider is good at everything – fast, high, wide – nothing is a problem for him. Last weekend, the pair came third with the Nations’ Cup team in Falsterbo. And now the victory in Aachen, the show that O‘Connor claimed is the “best in the world!”

The best German rider was Marco Kutscher and his Westphalian-bred mare, Chaccorina by Chacco-Blue. The eleven-year-old bay mare, whom Kutscher competed in the World Cup Final last year in Gothenburg with, excelled with a clear round in 39.17 seconds and secured sixth place.

The two shooting stars of the season, Laura Klaphake with the Swedish-bred horse Silverstone G by Diamant de Semilly (0/39.52) and Maurice Tebbel with the Hanoverian-bred Camilla PJ by Calmé (0/39.95) followed in seventh and eighth place, respectively. Behind the two youngsters – Maurice Tebbel is representing Germany tomorrow in the Nations’ Cup and Laura Klaphake is the reserve rider – came the veteran rider Ludger Beerbaum with the Oldenburg-bred Cool Down by Catoki in ninth place (0/40.0). 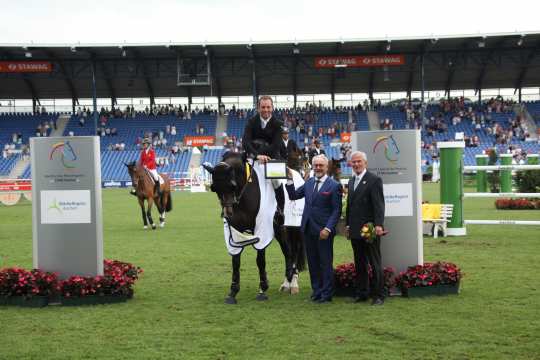