“Integrity is the most important thing.”

Jacques Van Daele is Chief Steward at the CHIO Aachen. We spoke with him.

At the CHIO Aachen last year the best dressage riders in the world impressed the spectators with fantastic sport and fair riding almost without exception. Almost. Because there was also some criticism about scenes on the warm-up area, the accusation: Horse-unfriendly riding, the result: discussions, accusations and insults across the social media.

The stewards of the International Equestrian Federation, the FEI, are responsible for making sure the regulations are observed. We spoke to Chief Steward, Jacques Van Daele from Belgium, about last year and the coming CHIO Aachen.

Question: What are your tasks in your capacity as Chief Steward?

Jacques Van Daele: Accompanying the riders – being there, in the stables, on the warm-up areas and the routes in-between. Watching and supervising everything that happens there.

Question: What form do these controls take on?

Van Daele: That is clearly stated in the regulations. It is laid down what is allowed and what isn’t. If everyone sticks to the rules it is simple.

Question: And? And does everyone abide by the rules?

Van Daele: Today, the situation is clear, the dressage sport has developed further, it has changed. A too low neck position is no longer accepted, not by the press and definitely not by the public. The equestrians simply don’t ride the same way they did 20 years ago. Most of the riders have long since understood this. But I must say: Unfortunately, not all of them. And we have to work on this together.

Question: So you are saying, the riders are aware that the sport has changed?

Van Daele: Yes, of course! Sure! In most countries.

Question: But that also means: Not everywhere yet?

Van Daele: There are still exceptions. A few people are not quite convinced yet – but that will come in time! I will continue to stay cool and talk to the few riders concerned. And if it really doesn’t work, then we have to take a different approach – which I don’t like to have to do at all.

Van Daele: …that I did in fact have a few difficulties with riders in the past. They didn’t understand why they had been shown a yellow card. In that case, I try to explain why. I take plenty of time to do so, an hour, an hour and a half. They don’t have to agree with what I say, but they at least have to listen to why I have said “Excuse me…”. We are not enemies, but when things go too far, they go too far.

Question: Can you describe your work in practice?

Van Daele: Talking, talking, talking. The people I work together with are the riders. We talk a lot and often. Not always on the practice areas, also in the stables and after or before the warm-up. And if I can spend a weekend without cautioning anyone or handing out any yellow cards, then we all find it much better.

Question: Should the stewards perhaps reactive more offensively? In other words, intervene more strongly? Already showing the yellow card on the warm-up area? To also signal to the outside world that something is happening?

Van Daele: We do intervene, react and also let the riders know that. But yes, perhaps we haven’t demonstrated that clearly enough to the outside. I always say to my stewards: “Don’t shout! Go over and say what has to be said.” And if that doesn’t help – then I am there. I am always there.

Question: Your creed is talking to each other?

Van Daele: Yes, that helps so much. There are riders, who I get on very well with, but there are also difficult riders. It is not always just easy – it can sometimes be hard.

Question: Does your training as a criminal investigation detective help you deal with these difficult cases?

Question: Because one lets the other person finish speaking…

Van Daele: And respects and listens to him! Instead of just preparing the answer, without really listening. Namely, that is when one starts arguing. If the people are worked up, I say: “Wait half an hour and then we will talk. That works in 90 percent of the cases. For me integrity is the most important attribute – say what one does, and do what one says.

Question: Do you think your work is going to be different this year compared to last year’s CHIO?

Van Daele: The most important thing will be to make it clear that we are actually doing something. The spectators probably thought: They are just sitting around… This year the stewards are going to be wearing bibs so that they are immediately recognisable. And it is quite clear: Not everything was right last year, we reacted too late on one occasion and that was my fault. If somebody doesn’t ride fairly, we will discuss the matter. Not afterwards, but indeed immediately.

Question: Are you looking forward to the CHIO?

Van Dele: Of course! Why not? You know, last year wasn’t my highlight, but it would be wrong to quit now. That is not my style. I can only do my work as well as I can and try to motivate everyone in the team to do the same. And if a rider says a simple “thank you” before heading home. Just “thank you” – then I am happy. Then, I always respond: “Don’t thank me. Thank my team!” 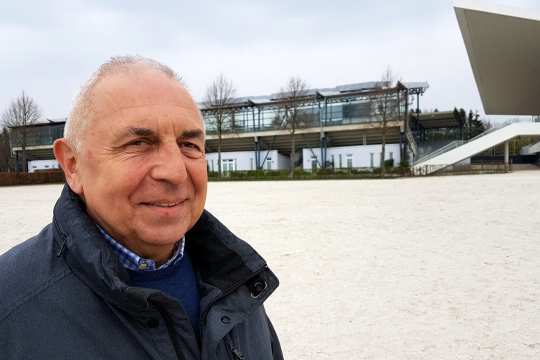