With precision work, the master rider, Ingrid Klimke, pulled off the feat that so many other pairs in the SAP-Cup had endeavoured to do, to no avail: Ride clear in the cross and stay within time. Achieving this aim meant she secured gold in both the individual and team classifications.

Ingrid Klimke and SAP Hale Bob were lying in the third place in the individual rankings after the dressage and jumping. They were one of just three pairs to finish the course clear in the allowed time. The pair raced over the finish line accompanied by the thunderous applause of the crowd. SAP Hale Bob or “Bobby” with his ears still pricked forwards still looked like he was ready to attack the course again. An overall score of 24.7 minus point meant the victory for Ingrid Klimke. It is already her third triumph at the Soers after winning in 2015 (Escada) and 2017 (SAP Hale Bob). Second and third place went to the two other horse and rider combinations that were in the time: Michael Jung with Chipmunk (25.5 minus points), followed by Australia’s Christopher Burton with Quality Purdey (27.0).

The German team were already heading the leaderboard before the cross and were able to hold on to this lead with ease. On a total score of 94.5 minus points, the team comprising of Ingrid Klimke/SAP Hale Bob, Michael Jung/Star Connection, Andreas Dibowski/Corrida and Josefa Sommer/Hamilton asserted itself against the teams from New Zealand (102.7) and Australia (112.4). Whereby Josefa Sommer Pech was rather unlucky because her horse, Hamilton, lost a horseshoe after the fourth obstacle already and she had to retire. However, fortunately all of her team colleagues jumped clear and Klimke was even in the time, so it didn’t affect the team result.

Rüdiger Schwarz has been building the cross-country course for the eventing in Aachen for 15 years. Everyone was in agreement that the tasks Schwarz had set the riders and horses in this year’s SAP-Cup were more difficult than ever before. “Yesterday evening, we knew that we had got a difficult course ahead of us,” was how Ingrid Klimke described the mood of the eventers on the eve of the cross. Rüdiger Schwarz was completely convinced with his design: “We know that good pairs compete here in Aachen. On arriving at the Soers one is already aware that the Grand Prix on Sunday is going to be more difficult than the Grand Prix in Münster – and that the four-star competition is going to be more difficult than anywhere else.”

On the whole, it was the three obstacle complexes that faced the riders with problems. On the one hand, the Rolex Complex (7 a-d), where after entering the water and riding under a bridge one had to take a narrow obstacle directly after a 90-degree turn. A fence that the horses didn’t see until very late. Peter Thomsen took a fall here with Casino, because the grey horse tried to jump over the corner at the widest point. “A mistake of the rider” according to the German national coach, Hans Melzer’s analysis. Thomsen steered the horse in the direction of the obstacle too late. The Turkish Airlines Complex (15 a, b and c) was the next big challenge. Here narrow elements had been built in the middle of a driving obstacle, which confused the horses for instance if the riders headed towards the obstacle too fast. Finally, the STAWAG Complex just before entering the stadium, a corner followed by two hedges at an angle demanded the full concentration of both the horses and riders.

The riders had to make sure they reduced their speed before taking these obstacles. Then, they had to make up for the time they lost on the long stretches in between the fences. This demands condition and very well-ridden horses. It wasn’t impossible to make the time, because the ground was perfect, as Michael Jung praised. In the end, Rüdiger Schwarz‘s strategy paid off – even if he did admit that he had been a “bit sad” in the middle after the many run-outs, especially in the water complex. But particularly the last ten pairs impressively demonstrated that the tasks set were indeed manageable. And the three that ultimately stood on the winner’s podium, are actually three of the best eventers in the world: Ingrid Klimke, Michael Jung and Chris Burton.

The performance of Michael Jung’s Chipmunk, who won here in Aachen last year under Julia Krajewski and who now came second with his new rider is worth a special mention. The three-time Olympic gold medallist, Michael Jung is of course delighted that they are harmonising together so quickly: “It is fun to see how quickly we have grown together. One notices the difference from competition to competition and at home.” 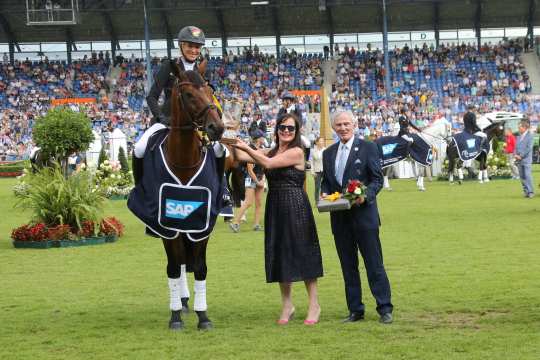