Ijsbrand Chardon winner across the board at the CHIO 2018

The Dutch four-in-hand driver, Ijsbrand Chardon’s first victory at the CHIO Aachen was 31 years ago, the last victory ten years ago. His time had come again this year. Chardon not only won the individual classification in the Prize of the Richard Talbot Family, but also the obstacle driving competition, the Prize of the Heitkamp & Thumann Group, as well as the Nations Cup team classification together with his son Bram and Koos de Ronde.

Ijsbrand Chardon won’t forget this CHIO Aachen in a hurry. With today’s only clear round in the obstacle driving competition, the Prize of the Heitkamp & Thumann Group, Chardon perfected his victory in the overall classification of the CAIO. The obstacle driving competition was very tricky. Chardon not only demonstrated his driving skills by reaching the finish line in a time of 105.46, but also the fact that he has nerves of steel. Georg von Stein (109.19) came second in this competition, followed by the Belgian driver Edouard Simonet (110.04). The fourth and fifth places of the two German riders, Mareike Harm and Anna Sandmann, were also noteworth. The latter, the daughter of Christoph Sandmann, one of Germany’s top drivers, is pretty new to the four-in-hand driving sport and after receiving a wild card to compete in Aachen from the organisers put in an excellent performance.

Prize of the Richard Talbot Family

Apropos newcomers – a further one in Aachen is Ijsbrand Chardon’s son Bram. The 25-year-old has already won four-in-hand driving competitions but had never competed in Aachen before and had stated in the run-up to the show that he wanted to come under the top ten. “But we also have the potential to make it under the top five,” the Dutch driver stated before today’s final. Indeed, he ultimately came third in the individual classification on a total score of 165.51 minus points behind his father in first place (157.87) and the Australian driver Boyd Exell (158.82). Exell could even allow himself to pick up four faults in the concluding obstacle driving class and still retain the overall victory, but in fact two balls fell, so he had to make do with second place.

Exell didn’t compete in the winning round of the Prize of Heitkamp & Thumann Group. He stepped down voluntarily because his broken ankle was causing him some pain: “I wouldn’t have thought it, but I am tired! One needs one’s leg more than one imagines…!”

The Dutch team more or less hold the patent for the victory in the Nations Cup in Aachen: It was their eleventh victory in a row. The Oranje drivers finished on a total score of 319.8 minus points (Ijsbrand Chardon, Bram Chardon, Koos de Ronde) and left the German team (Michael Brauchle, Mareike Harm, Georg von Stein) trailing behind on a score of 341.26 minus points. Third place went to the Belgian team (Dries Degrieck, Glenn Geerts, Edouard Simonet/353.95 minus points. 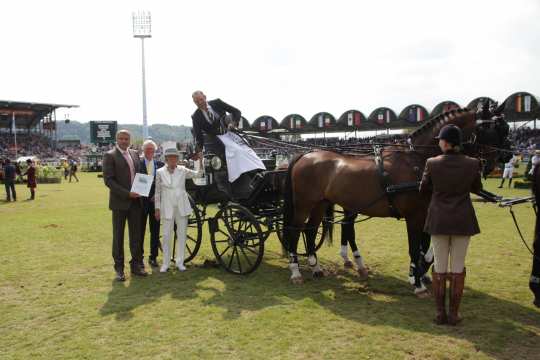