Stockholm, Rome, Tokyo, Mexico, Munich and Montréal – this is where Hans Günter Winkler, the biggest equestrian sport legend of all time, celebrated his impressive Olympic victories. But Aachen was always the place that meant the most to him in his equestrian career. He took part in countless CHIOs and Championships that were staged in the imperial city. Here at the Soers, he is the undisputed crowd’s favourite, this is where he won the Grand Prix of Aachen three times, every child knows him here.

A gala in the Main Stadium presented by NetAachen was dedicated to him on Friday afternoon during the CHIO Aachen 2016. Indeed, there were three anniversaries to celebrate: 60 years ago “HGW” – his memorable initials – claimed double gold at the Olympic Games in Stockholm, 30 years ago he retired from active competition sport in Aachen during the World Championships in Aachen and this year he is celebrating his 90th birthday on July 24th. “I am deeply moved that so many people have come to my equestrian sport living-room to celebrate together with me,” said Winkler visibly moved, adding shortly afterwards: “I was and still am your grateful Hans Günter Winkler.” Thunderous applause from the stands.

In addition to companions such as David Broome, Nelson Pessoa, Paul Schockemöhle or Otto Becker as well as a video review and a video message from the IOC President Dr. Thomas Bach, he and “his guests”, the Aachen crowd, were offered a programme lasting around 45 minutes that looked back on the significant highlights in his sporting life. Very impressive: A show performance comprising of around 125 brown ponies. They personified the victories of the “dream team” Winkler/Halla – 125 in total. On the other hand, a group of children presented the Olympic Rings representing Winkler’s Olympic victories and U25 riders performed a jumping quadrille. Because after his equestrian career, Winkler asserted himself for aspiring young riders in the form of various promotion programmes – and still does to this very day. The entertaining programme was accompanied by the Koblenz Army Music Corps, which not only let the sounds of the “Elector’s March of the Horsemen” ring out throughout the stadium, but of course, they also played the German National Anthem for the special guest of honour.

In memory, “Halla” stood in the middle of the “Holy Grass” throughout the entire programme, the wonder mare, with whom HGW celebrated so many international victories. “Only” in the form of a bronze statue, which had been transported from Warendorf, where Winkler lives, especially for this gala. The exceptional horse, about whom Winkler once said, “She’s simply got a screw loose, just like me,” died in 1979.
At the end of the gala, there was a further special surprise for Winkler: A spectator choreography on the AachenMünchener stand, as well as banners bearing the words “Thank you” and “HGW”. And as is appropriate for a true equestrian sport expert, Hans Günter Winkler did a lap of honour at the end of the gala amid the rapturous applause and standing ovations of the crowd. An emotional finale for a living legend of the equestrian sport. 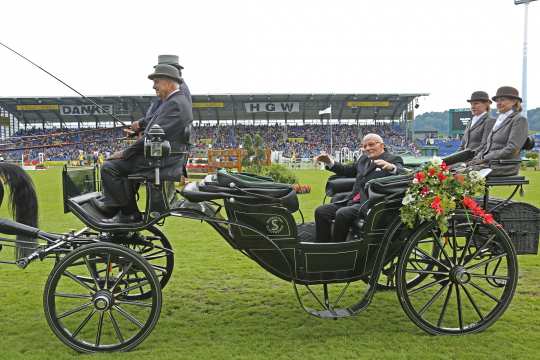