Today at the CHIO Aachen, the largest equestrian sports event in the world, the Grand Prix of the CDI4* tour kicked off with the HAVENS Horsefeed Prize. Unlike in the jumping stadium, the German competitors proved unbeatable in the Deutsche Bank Stadium.

The professional rider, Hubertus Schmidt, the Olympic team gold medallist of 2004, was delighted at his victory with his Trakehner stallion, Imperio, (Score: 76.043 percent) who after a long injury, has constantly achieved top placings recently. The pair are on the longlist for the Olympic Games in Rio de Janeiro in August.

The same applies for the following pairs, who all finished under the top five: The two-time World Cup bronze medallist, Jessica Bredow-Werndl came second with Unee BB (74.90). Anabel Balkenhol and Dablino came third with a score of 74.486 ahead of Fabienne Lütkemeier with D’Agostino (73.814) and Jenny Lang-Nobbe with Loverboy (72.700). The competitions in Aachen will ultimately decide, who will represent Germany in Rio.

The company HAVENS has been a partner of the CHIO Aachen since 2003. Not only the winning rider and runners-up received prizes from HAVENS, but also the groom of the winning horse. She won a rucksack and a bouquet of flowers – although not much was left of them after Imperio thought the flowers were for him and promptly tucked into them. 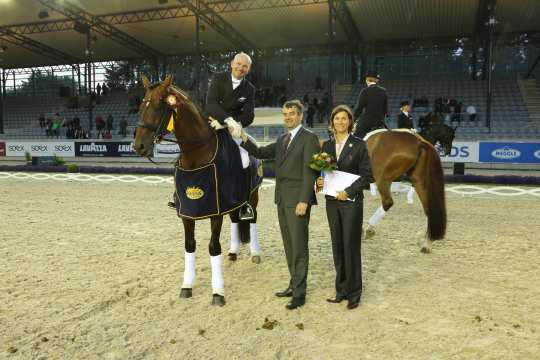