Life is a concert of special requests – the organisers of the CHIO Aachen and the Aachen Symphony Orchestra are making this possible. In the rehearsal room of the orchestra, the old transformer station in the Kapuziner Karree, they informed the press jointly about the probably most extraordinary concert of the coming year: “Horse & Symphony” at the World Equestrian Festival, CHIO Aachen 2017.

The atmosphere is unique, when night falls in the Deutsche Bank Stadium that holds a capacity of 6,000 spectators. Classis riding meets classic instruments, selected equestrian athletes and show stars meet the fantastic live music of the Aachen Symphony Orchestra. “It’s no wonder that the concert is the event at the CHIO Aachen that is always first to be sold-out,” stated Carl Meulenbergth, President of the Aachen-Laurensberger Rennverein e.V. (ALRV). “This format is so special because it brings two completely different worlds together – music and animals,” added Michael Schmitz-Aufterbeck, General Director of the Aachen Theatre. Together with the Administration Director, Udo Rüber (“The atmosphere in the Deutsche Bank Stadium is incredible”), he underlined the outstanding cooperation between the two Aachen institutions, the Symphony Orchestra and the CHIO.

The two “Horse & Symphony” concerts form the prelude to the ten CHIO days at the Soers for the CHIO Aachen visitors. For one person they are not going to be the start of something, but indeed the end: Aachen’s General Music Director, Kazem Abdullah, will be conducting in front of his Aachen crowd for the last time. “Horse & Symphony” is of course one of the most extraordinary things I have done during my time in Aachen,” stated Abdullah. “So, we said: To commemorate the occasion he is allowed to make a request,” explained ALRV Chairman and Show Director, Frank Kemperman. And Abdullah didn’t hesitate either: So at least one thing is for sure – the concert-goers can definitely look forward to Richard Wagner’s “Ride of the Valkyries”.

After allowing Abdullah a request, the idea arose to organise the complete Horse & Symphony as a special request concert in 2017. Anyone who likes can request a piece of music using the corresponding form. The organisers will then compile the programme from the submitted entries. The form is available online at www.chioaachen.de/wunschkonzert or in the “Aachener Nachrichten” and “Aachener Zeitung” newspapers on Saturday. The audience can not only choose the music, but also several show elements. In addition to exquisite new show numbers there is also going to be a “Best of” the past 14 years. An exceptional prize will be raffled off among all those who place a request: Several musicians of the Symphony Orchestra will make a house call and will hold an exclusive private special request concert at the winners’ homes. 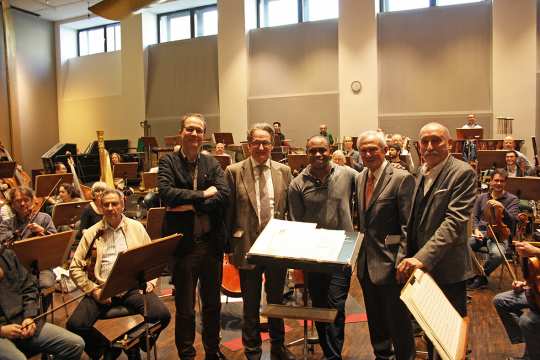