A magical evening at the Soers

This evening had all of the components that makes “Horse & Symphony” so unique: Equestrian sports, sometimes elegant and graceful, sometimes powerful and dynamic, accompanied by impressive music played live by the Aachen Symphony Orchestra conducted by Mathis Groß. All of this in the Deutsche Bank Stadium that was already virtually sold out on the first evening (the second concert this evening is indeed sold-out) against the background of the sun setting at the Aachen Soers. An unforgettable, an incomparable, a wonderful evening, which ended in thunderous applause from the audience for the participants and musicians.

On late Friday evening, Alizée Froment daintily floated through the Deutsche Bank Stadium in a white angel’s costume to Yann Tiersen’s touching melodies from the film “The fabulous world of Amélie” on her stallion Mistral. At times “without using her wings”. Her horse was only equipped with a neck strap. The performance of the former Grand Prix rider was applauded loudly. And not only hers: Because her appearance was just one of the highlights at this year’s edition of “Horse & Symphony” at the CHIO Aachen. Around 190 people, 65 musicians and approx. 60 horses took part in the show.

“Mystical – fairytales, myths and heroes” was the motto of the evening. And indeed: It was as if a huge fairytale book had been opened, which all sorts of mythical creatures, magicians and fairytale figures jumped out of. Their performances were accompanied by the fantastic live music of the Aachen Symphony Orchestra conducted by Mathis Groß, répétiteur and music director at the Theatre in Aachen. He certainly didn’t waiver the opportunity of exchanging his baton for a place at the piano to accompany Alizée Froment’s show piece either.

Eight Shetland ponies, who formed a sulky quadrille to Hector Berlioz’s “Symphony Fantastique”, kicked off the show cutely. Later in the evening the riders and sulky drivers from “Fohlenhof Farbenfroh” in Allgäu put in a further performance in the saddles as the “Miniature Spanish Riding School” – in homage to the quadrille of the Spanish Riding School in Vienna. What could have been more a more fitting piece of music than Mozart’s “Little Night Music”? The crowd cheered the aspiring young athletes from Southern Germany enthusiastically.

The lively “Shetties” were followed by the “fat placid guys”. Eight draught horses from the North Rhine-Westphalian State Stud and their riders brought the classic “Snow White and the Seven Dwarfs to life in the form of a horse polonaise.
Her performance brought back childhood memories for some of the spectators: Mary Poppins. The most famous nanny in the world really did fly stylishly over the Deutsche Bank Stadium with her parasol, hat and handbag – the Theater Lufttanz Berlin made it possible. At the same time the show group Lobberich portrayed a nostalgic annual market scene in the arena with jugglers from the RWTH Sports University. At the same time the equally familiar melody “Mary Poppins Suite” sounded from the orchestra stage.
Subsequently, the aspiring magician Harry Potter and his friends from the magic school Hogwarts, presented by the Dahmen Dressage Stables and the Feberberg Ballet School filled the stadium with plenty more magic to the symphony suite “Harry Potter” by John Williams.

The vaulters also did the honours on this evening: The successful S team from RSV Neuss-Grimlinghausen presented their winning freestyle routine from the CHIO Aachen 2017 to the soundtrack of “Alice in Wonderland”. The evening whisked the crowd off to a “Thousand and one Nights” shortly before the break. Dancers from the oriental dance group of the RWTH Sports University together with magnificent mares and their foals from the Arab Stud Ismer put in a wonderful show performance to Nikolai Rimski-Korsakow’s “Scheherazade”.

After the break, two “youngsters“ conquered the arena: The just 15-year-old star violinist Enzo Kok and the dressage rider, Johanna Kullmann, who is one year younger and winner of the Pony Tour at the Aachen Youngstars 2017, with her pony ”Casino Royale”. An impressive performance entitled “Beauty and the Beast”!
And of course the boy who didn’t want to grow up, couldn’t be missing either: Peter Pan and his friends. The show piece by the Britta Rasche-Merkt team, the Ferberberg Ballet School and the Lufttanz Theater Berlin.

Once again this year, part of the admission fee was donated to a charity. Carl Meulenbergh, President of the Aachen-Laurensberger Rennverein e.V., presented the Stolberger Charity “MENCHENSKIND®” with a donation cheque for 12,000 Euros this evening.

Tickets for “Horse & Symphony at the CHIO Aachen 2019 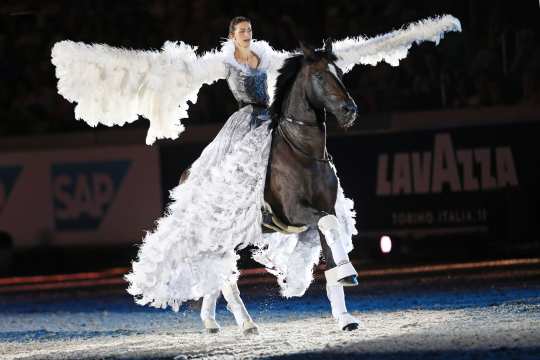