“Höhner”: A song for the CHIO Aachen

Live premiere during the Opening Ceremony on June 28th, 2022

They have just finished performing with Andre Rieu at the KölnArena, now the “Höhner” are going to open the CHIO Aachen, they will namely be playing live during the Opening Ceremony. And not only that: The band from Cologne have recorded an own song especially for the World Equestrian Festival.

The song composed by the Höhner is called “In diesem Moment” (At this moment). The keyboard player of the Höhner, Micki Schläger, brought the two parties together. Schläger is well familiar with the CHIO Aachen, he has already visited the Soers several times. The musician didn’t want to reveal too much about the tune yet though, he only confirmed that “it is a ballad, which suits the CHIO and its great emotions down to the ground.” The live world premiere of the song will take place at the CHIO Opening Ceremony on the evening of June 28th. The Opening Ceremony is namely going to be more musical than ever, because an appearance by the superstar, Wincent Weiss, has also been announced.

It is not the first sports hymn in High German for the “Höhner”, who are celebrating the 50th anniversary of their band this year. The hit for the Handball World Championships in 2007 “Wenn nicht jetzt, wann dann” (If not now, then when) – which the band won platinum for – and the song “Steh auf, mach laut!” (Stand up and be loud!) that was played for the first time non-stop during the Football World Cup in 2014 are both legendary. Tickets for the CHIO Aachen Opening Ceremony (28.6.2022, 8 p.m.) are available from the CHIO Aachen website and from the hotline at +49-(0)241-917–1111.

The Höhner on the web.

The CHIO Aachen on the web. 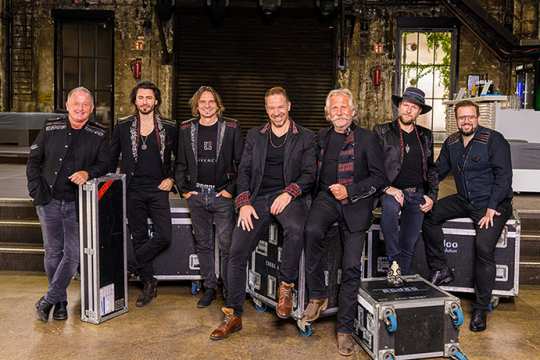 The "Höhner" with among others their keyboard player Micki Schläger (left) and their new singer, Patrick Lück (centre). (Photo: Kay-Uwe Fischer).