When the World Equestrian Festival, CHIO 2022, came to an end, the Show Director, Frank Kemperman, was able to announce that it had been a “full house” again: 6,300 visitors at the dressage in the morning in the Deutsche Bank Stadium, 40,000 spectators during the Rolex Grand Prix of the show-jumpers. Between June 24th and July 3rd, 356,800 spectators had visited the showgrounds at the Aachen Soers that are steeped in tradition.

It was the last CHIO Aachen for the Dutchman, Frank Kemperman, in his capacity as Show Director. At the end of September, he is joining the Supervisory Board. During the traditional Farewell to the Nations pageant, the focus wasn’t on the horses and athletes for the first time ever, instead the spotlight was on the big bicycle for the outgoing Show Director. His white roadster that is world-famous in Aachen had been fixed to the back of a carriage pulled by two horses – surrounded by a sea of tulips – and then Kemperman mounted his steel steed  for his final lap of honour. The ecstatic crowd waved goodbye to him with their handkerchiefs in good old Aachen style – but this time they were orange in colour. A fantastic farewell for “Kempi” after 29 years, initially as General Manager and then later as Chairman of the Aachen-Laurensberger Rennverein e.V. 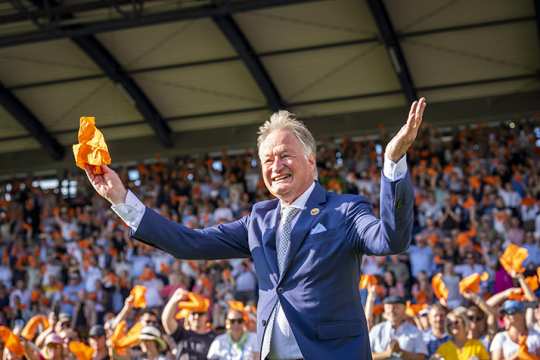