Red carpet, elegant attire and a festive atmosphere: Traditionally, together with Prof. Dr. Hermann Bühlbecker, the proprietor of the Lambertz Gruppe, the CHIO Aachen organisers invite guests to attend a Gala Evening.

This year, the organisers consciously invited guests to attend the CHIO Aachen Opening Ceremony, so that at least a hint of the traditional Media Night hung in the air at the Soers. Even if it wasn’t a party – due to Corona– but instead a reception followed by a dinner, numerous celebrities found their way to the Champions´ Circle at the showgrounds. Golden glory shone out on the red carpet: The Olympic gold medallists from Tokyo – the eventer Julia Krajewski, who claimed individual gold; Jessica von Bredow-Werndl winner of Olympic gold in the dressage and the rest of the gold-winning team comprising of Dorothee Schneider and Isabell Werth as well as the individual gold medallist in show jumping Ben Maher – attended the event wearing their gold medals – together with the sprinter Felix Streng, who won the gold medal in the 100 metres at the Paralympic Games. On the whole, the best equestrian athletes in the world enjoyed the festive opening of the CHIO Aachen. For example, Jessica Springsteen from the USA – the daughter of the rock star legend Bruce Springsteen – had travelled to Aachen for the first time, she walked over the red carpet together with her US team colleague, Laura Kraut and her partner, the four-time Rolex Grand Prix winner and thus CHIO Aachen record holder, Nick Skelton. Before dessert, the stars made their way in the other direction again, namely towards the Main Stadium for the Opening Ceremony. On Wednesday, things will be getting serious in the ring: The highlight is the Turkish Airlines – Prize of Europe, which starts at 6.40 p.m. in the Main Stadium. Tickets are available online, from the hotline (+49-241-917-1111) and at the box office. 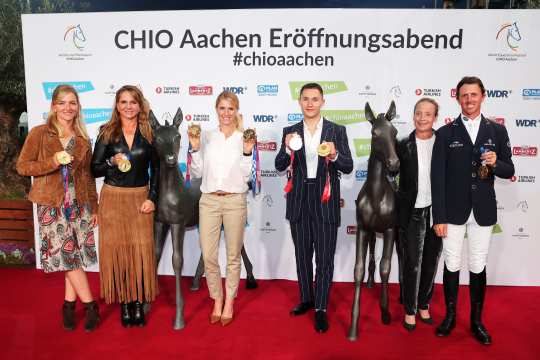