Lars Volmer celebrated his 24th birthday four days ago. He belatedly secured himself the best gift of all: The victory in the Final of Germany’s U25 Trophy of the German Top Equestrian Sport Foundation, Prize of Family Müter.


Lars Volmer competed in Germany’s U25 Trophy, Prize of Family Müter, for the first time in 2017. Back then, he won the qualifier, but things didn’t go quite right for him in the Final. This time he did it the other way round – he picked up four faults in the qualifier, but put in two fantastic founds in the Final and crossed the finish line in fastest time in the jump-off against three fellow riders. His partner in success was the ten-year-old Zycarlo Z by Zandor Z, whom Johannes Ehning had placed at Volmer’s disposal. Volmer works for Ehning part-time. He spends the rest of the day looking after the horses at home. His whole family has been involved in the equestrian sport for generations. He was just ten years old when he won his first medium jumping class. Since then he has represented Germany several times at European Championships for younger riders, as already mentioned, he has competed here in Aachen and much more. He disposes of plenty of experience. Nevertheless, he said, “Of course, it is always nice to win. But winning here in Aachen is something very special!”

Even though the Final wasn’t staged in the Main Stadium as in previous years, there were still plenty of spectators. It seemed like the whole of Aachen had set off to enjoy Soers Sunday shopping, eating and watching sport. Like Franziska Müller, who finished second, said: “After the long period of Corona it is lovely to be greeted by applause when you enter the ring!” The crowd not only applauded her on entering the ring, but also when she left it with her Rhineland-bred mare Cornado’s Queen after jumping clear in the second-best time of 45.75 seconds. It was the second time she competed in the Final of Germany’s U25 Trophy. She came third last year, second this year, what about next year? She has a clear goal! Especially since Franziska says her mare, which the Müller family actually already bought as a foal, loves big grass arenas.

Third place went to a newcomer to Aachen: Christin Wascher with the 11-year-old Oldenburg stallion, Quincy by Quintero. The 23-year-old was the first rider to go in the jump-off and she put in a clear round. But, at the end of the day, her time of 48.39 seconds wasn’t fast enough. Christin already notched up many victories in the Pony and Junior age class, among others at the German Championships. However, until now she didn’t have the appropriate horse for the U25 Tour, she reported. The Quintero-son, Quincy, whom she has been competing with since 2020, is now the right partner for the big tasks on the way into top sport.

Unfortunately, the fourth pair in the jump-off were rather unlucky: Emilia Löser and Lesodero. The rider who is a member of Andreas Kreuzer’s team and her 13-year-old Lordanos-son, reached the finish line in the fastest time of 43.98 second, but they picked up four faults along the way, which meant they “only” ranked fourth. 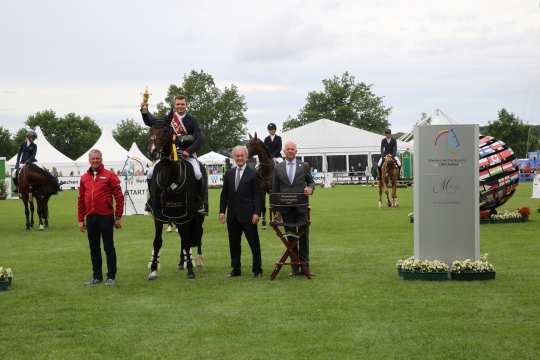