It was an exciting team that Otto Becker had selected for the Mercedes-Benz Nations’ Cup 2022 in Aachen: Jana Wargers with Limbridge, Christian Kukuk with Mumbai and André Thieme with DSP Chakaria all made their debut on the Nations’ Cup team in Aachen. Whereby the latter two riders also competed at the Olympic Games in Tokyo and were part of the team that won silver at the European Championships in Riesenbeck. Janne Friederike Meyer-Zimmermann has been successful so many times here in Aachen, but it was her first big appearance with her new star, the Plot Blue son,  Messi van’t Ruytershof. What’s more, in 2022 she is making her Aachen comeback after giving birth. Otto Becker said: “Of course we also have some more experienced riders who have often ridden for the team, like Daniel Deusser and Marcus Ehning. But we wanted to bring different riders together to find the right combination in the direction of the World Championships. And these four riders prove that they deserved to be on the team!”

And they certainly did. Jana Wargers and Limbridge made the promising prelude with a clear round. They merely picked up one fault for the time. Then, Janne Friederike Meyer-Zimmermann and Messi: A clear round. Unfortunately, Christian Kukuk and Mumbai didn’t manage to follow suit; the pair picked up eight faults. The last to go were the two team silver and individual gold medallist at the 2021 European Championships: André Thieme and DSP Chakaria. The pair are a well-rehearsed team and totally lived up to the expectations by delivering a clear round. As such, Germany entered the second round with just one penalty point.

In the second round, Jana Wargers lightly brushed a rail with Limbridge. But Janne Friederike Meyer-Zimmermann and Messi literally flew over the challenging course that Frank Rothenberger had designed this evening – his second clear round. Then came Christian Kukuk and Mumbai. The tension in the stadium was tangible. If he stayed clear, Germany’s chancing of winning would very high. And Mumbai jumped fantastically, Christian Kukuk said afterwards: “It was the best round we have ever had!” And André Thieme? He didn’t even have to ride in the second round. And he was pretty pleased about that, fully aware of the pressure that the last rider is always under, if he has to remain clear. I’d to Otto (Becker) that I’d really like to ride for the team. Then, a few days beforehand I said to myself why did you say you would ride, that is really putting me under pressure… Then I was the last to go and you know the team needs a clear round – all of the riders know what that feels like. So I must say: I was very happy with my first round, but much happier with my second round.”

It was thanks to André Thieme and the fact that the Belgian duo Gregory Wathelet and Nevados S, the two bronze medallists with the team in Tokyo and winner of the Grand Prix of Aachen in 2017, that he didn’t have to ride in the second round. Wathelet took it with dignity: “I hope to do better next time. The team did a very good job.” Belgium ultimately finished second on eight points. Alongside Wathelet the Belgian team comprised of Nicola Philippaerts with Katanga van het Dingeshof (4/0), Wilm Vermeir with IQ van het Steentje (8/5) and Jérôme Guery with Quel Homme de Hus (0/0).

Third place went to Great Britain, who also finished on eight faults, but with a slower combined time. The hero of the team was Harry Charles, who at the tender age of 22 was one of the youngest riders in the class, succeeded in jumping two stylistic double clear rounds with his Romeo. It wasn’t his first appearance in Aachen, but his debut in the Mercedes-Benz Nations’ Cup. “The first time I came here was 4 years ago. And I said to myself the next time I come back I want to be part of the team. And it was everything I’d dreamed of. To jump double clear the first time you ride in the Nations’ Cup in Aachen.” The proof that dreams can come true. “I am very proud of my horse; he did an amazing job. And coming third is not too bad either,” he concluded. How true!

What he really regretted was the fact that he missed out on the special CHIO Aachen prize that the members of the winning team collected. Each of them received a tablet with their own winning horse as a CHIO Aachen NFT, their avatar for the CHIO Aachen Metaverse (for more information see www.chiohorseclub.com). However, there was also a special bonus of 100,000 Euros, which is divided up between all riders who jumped clear in both rounds. 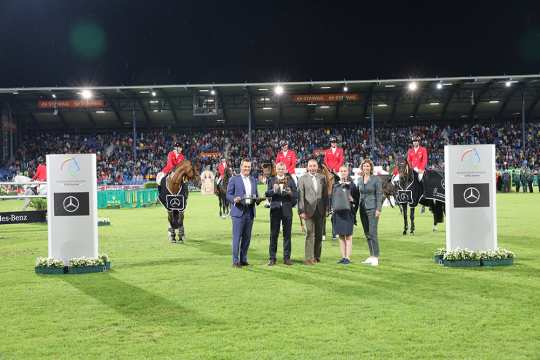