Germany wins the Mercedes-Benz Nations’ Cup with an ideal result

The German show-jumpers had to wait a long time for this victory! The last time they won the Mercedes-Benz Nations’ Cup at the World Equestrian Festival, CHIO Aachen, was in 2008 and never before under the management of the national coach duo, Otto Becker and Heinrich-Hermann Engemann. This evening the time had finally come. Three of the team riders were actually already on the team in 2008: Meredith Michaels-Beerbaum (at the time with Shutterfly, today with Fibonacci), Christian Ahlmann (at the time with Cöster, who recently died, today with Epleaser van’t Heike) and Ludger Beerbaum (2008 with All Inclusive NRW, today with Casello). This evening Marcus Ehning and Pret a Tout rode in place of Marco Kutscher and Montender. Ludger Beerbaum said: “I am very very satisfied with our performance. That was definitely one of the better victories!” In fact, it couldn’t have been better. Because after the two rounds, the team still had a clean sheet.

After the first round it was a draw between Germany and the USA, both with zero faults. Only Christian Ahlmann and Epleaser van’t Heike made a small mistake and picked up four faults in the triple combination in front of the Mercedes-Benz Stand and were thus the scratch result. Three pairs had already jumped clear for the USA, so that the two bronze medallist from the 2014 World Equestrian Games, Beezie Madden and Cortes ’C’, didn’t even have to compete in the first round – a clear advantage should it come to a jump-off.

However, in the second round, when it was down to Madden as the last rider of her team to force a jump-off, after three German pairs had already jumped clear, the water ditch was in the way. Or it was too wide. In any case, Cortes ’C’ stepped in the water and thus paved the way for the German victory. Of the approx. 38,500 spectators at the Soers, around 38,250 let out a cry of joy. The spectators in Aachen are namely fair sportsmen! The USA came joint second with the French team.

After the prize-giving ceremony, an extremely high-spirited National Coach, Becker, chatted about the stress that he had experienced in the run-up to Aachen, because he had to take the decision to place the Olympic candidate, Daniel Deußer, on the reserve bench: “I didn’t want it to be understood as a signal for Rio!” It has still not yet been decided, who will ride at the Olympic Games. Especially since Christian Ahlmann, Marcus Ehning and Ludger Beerbaum have two horses on the shortlist. “Fortunately, we have this luxurious problem,” commented Becker. In response to the question as to which of his horses he favourises, Marcus Ehning gave the clear answer: “I don’t care, but I want to ride one of them!” We will have to wait and see. On Monday, Becker has to name the five riders and horses, who will travel to Brazil. One reserve pair. The main thing is that Meredith Michaels-Beerbaum is as well prepared for her nomination as she was this evening: “Fibonacci flew this evening. I put some sticky stuff on boots for the second round, so that I felt a bit safer.”

Someone else was also happy with the outcome of the 2016 Nations’ Cup: Dr. Carsten Oder, Sales Director of Mercedes-Benz Germany. He revealed the fact that he is a horse whisperer: “I spoke to the horses outside and they told me that they are a bit jealous because only the riders were allowed to driven through the Soers in the Mercedes before the Nations’ Cup competition. So, we will have to come up with a different solution next year!“ That will be the 62nd year of partnership between the CHIO Aachen and Mercedes-Benz. 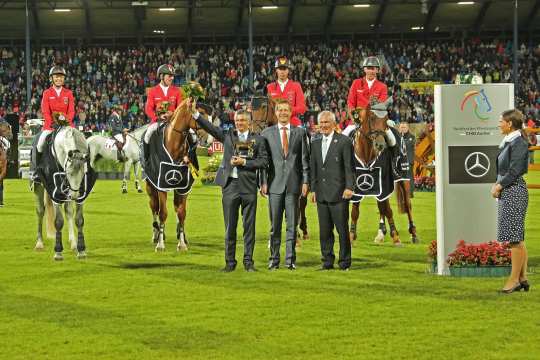