German dressage riders superior in the Prize of the Tesch Family

Round one in the Lambertz Dressage Nations’ Cup, the Grand Prix in the battle for the Prize of the Tesch Family, was a clear matter. It was impossible to beat Werth & co.

“We are extremely satisfied,” was the conclusion of Germany’s national dressage coach, Monica Theodorescu, after the Prize of the Tesch Family, the first classification in the Lambertz Dressage Nations’ Cup. No wonder, her team has a huge lead. An analysis of the day in telegramme style: As the first team member to ride, Dorothee Schneider laid a good foundation with Sammy Davis Jr. – it was his debut appearance in Aachen (74.529 percent). Hubertus Schmidt and Imperio were rather unlucky and didn’t perform as well as expected (71.371). Sönke Rothenberger and Cosmo just missed the 80 percent mark, because the rider had a problem counting the strides (78.757) and Isabell Werth put in a performance with Weihegold that she simply described as “tip top!” (83.171 percent).

Thus, the interim overall score of the leading favourites before the MEGGLE Prize, the Grand Prix Spécial on Saturday, is 236.457. They are followed by the USA on a score of 222.842, for whom Aachen is the highlight of the season. The US team comprises of Adrienne Lyle/Salvino (71.814 percent), Kasey Perry-Glass/Goerklintgaards Dublet (68.929), Olivia Lagoy-Weltz/Lonoir (71.514) and Laura Graves with Verdades (79.514).

The individual classification went to Isabell Werth, ahead of the US American, Laura Graves. The latter, who came second in the World Cup in Omaha, had announced in the run-up to the CHIO that her aim is to beat Isabell Werth. The first attempt failed among others because of the two-tempi flying changes. Graves’ concise comment: “We will try again in the Grand Prix Spécial!” Mistakes simply happen. That is part of the sport.”

Isabell Werth was totally happy with her ride. She said small errors had been down to her. But above all she is proud of “Weihe” alias Weihegold, who she had given a time-out after her victory in this year’s World Cup Final and for whom Aachen is the first outdoor show. “She was absolute focused.” Her conclusion: This is how it can continue!

Sönke Rothenberger came third. He wasn’t far off the 80 percent mark with his ten-year-young KWPN gelding, Cosmo. If the rider had practised the rein-back he might actually have hit the 80-mark, the national coach noted with a grin. And then the team Olympic gold-medallist miscounted the strides in the zig-zag half-passes. “That is doubly annoying, because the marks for this exercise count double,” stated Rothenberger. On the other hand, there were some absolute highlights in his test, i.e. the one-tempi flying changes, which several judges awarded him a 10 for.

Talking about judges – in her capacity as Chairman of the Judging Committee, Isobel Wessels (GBR) commented that it had been a “most phenomenal day” for her and the other judges, on which even the weaker performances had had their highlights and that overall the modern, harmonious style of riding is winning through. And that in an almost sold-out stadium. 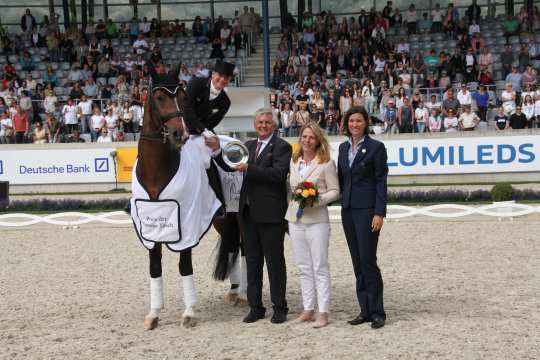