This year the Olympic mode applies for the Lambertz Nations’ Cup of the dressage riders at the CHIO Aachen, the World Equestrian Festival. That means, the winners of the team competition are not decided after the Grand Prix, the Prize of the Tesch Family, already, but instead after the MEGGLE Prize, the Grand Prix Spécial. Just like at the Olympic Games in Rio de Janeiro in August: Grand Prix + Grand Prix Spécial = team result. Naturally, one shouldn’t count one’s chickens before they hatch, but after the Prize of the Tesch Family, it certainly looks like Germany is going to win the Lambertz Nations’ Cup this year. With a score of 246.285 points, Germany already has a virtually uncatchable lead in the team classification, ahead of the USA (218.414) and Denmark (214.242). In the competition that Isabell Werth won, three German pairs were awarded a score of over 80 percent in the Grand Prix. That is historic. So, it is no surprise that the national coach, Monica Theodorescu, said: “That was fantastic, a super outcome and nevertheless there is still room for slight improvement – things couldn’t be better after the first day.”

With “room for improvement”, she was referring to the performance of the two youngsters in the team, Sönke Rothenberger (21) and Cosmo (9). The pair gave everyone a fright in the morning when the horse suddenly wanted to stop in the middle of an exercise. But Sönke Rothenberger stayed cool and finished the test well after the incident. And it still sufficed for a score of 75.60 percent, i.e. fifth place in the overall classification. The national coach praised the young team member for showing such nerves of steel.

The three ladies in the team, Dorothee Schneider with Showtime, Isabell Werth with Weihegold and Kristina Bröring-Sprehe with Desperados delivered excellent results, particularly Isabell Werth, who not only won the Prize of the Tesch Family, but also achieved a personal best result of 83.271 with Weihegold. Afterwards she beamed: “Aachen really is a special venue! And when things go so well, I am a bit touched…“ Whether her mare was nervous because of the setting? “No, she is a lady, they love that!”

The European Championship silver medallist of Aachen 2015, Kristina Bröring-Sprehe was also happy and satisfied after her ride with Desperados, which was rewarded with a score of 82.314 percent, the second best result today. She asserted herself against the new German Freestyle Champion, Dorothee Schneider with Showtime (80.70).

Both riders, Kristina Bröring-Sprehe and Dorothee Schneider, were on the silver-winning German team that competed at the Olympic Games in London in 2012. In Rio the mission is: gold. As Isabell Werth put it: “I think I can safely say that we have an extremely strong team that is certainly in a position to fight for gold.”

The team that will represent Germany in the dressage arena in Rio will be announced on Sunday. 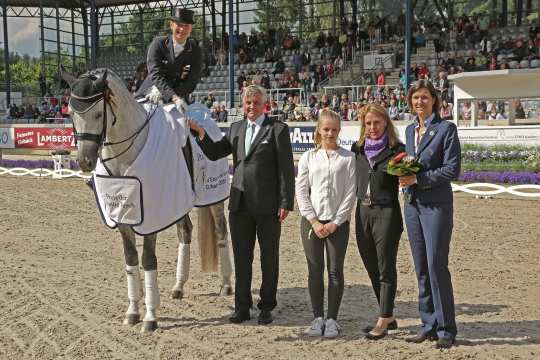