Ahlmann wins ahead of Deusser

The top German riders made it exciting in the STAWAG Prize, the most important competition on Saturday at the Aachen International Jumping. Ultimately, Christian Ahlmann claimed the victory ahead of Daniel Deußer. Steve Guerdat from Switzerland came third.


The atmosphere was fantastic on the second day of the Aachen International Jumping. Although strongly limited, 300 spectators were after all allowed in Deutsche Bank Stadium, which actually has a capacity of 6,300. The crowd made its presence extremely noticeable and thus provided a worthy backdrop at the traditional showgrounds at the Aachen Soers. So, it is no surprise that the winner found it “simply incredibly nice,” being able to ride in Aachen. “It is great being back here again, my sincere thanks to the organisers,” said Christian Ahlmann. Previously, in the saddle of Mandato van de Neerheide he caused a nail-biting atmosphere in the stadium. Particularly in the approach to the third obstacle in the jump-off “I didn’t know quite what I wanted to do, but Mandato took control, I haven’t a clue how we got over it,” Ahlmann grinned after the blunder. Ahlmann surprised himself with the victory, because as he commented aged only eight, Mandato is still very young. Perhaps a Rolex Grand Prix winner for the CHIOs of the future.

Talking about the Rolex Grand Prix: Daniel Deußer is very familiar with coming second in Aachen namely that was the case at CHIO Aachen 2019. Back then only Kent Farrington from the USA managed to beat “Double D”. Today, Deußer and Kiana van het Herdershof took just 0.26 seconds longer than Ahlmann to complete the course. The number one in the world ranking list, Steve Guerdat from Switzerland finished third with Bandit Savoie. 12 riders had reached the jump-off in the STAWAG Prize. The grand finale, the Allianz Prize, starts at 2.45 p.m. tomorrow, WDR is broadcasting the competition live from 3 p.m. onwards, ZDF will be showing a summary at 5.10 p.m. 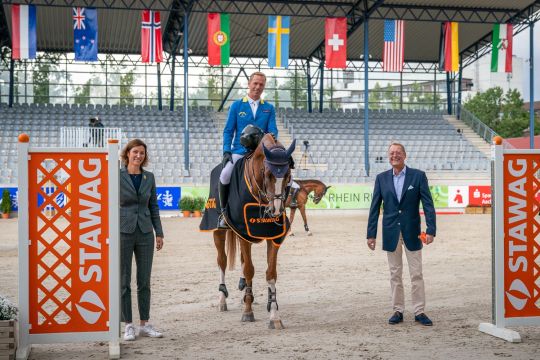