German competitors dominate in the Prize of Sparkasse

The German vaulters were undefeated in the Prize of Sparkasse at the CHIO Aachen 2019. The victory in the Nations Cup, which turned out to be a duel between the two teams of the German national coach, Ulla Ramge, was the crowning glory.

In the end, the victory with a sensational score of 27.445 of 30 possible points went to the team Germany I comprising of the individual vaulters Jannik Heiland and Janika Derks as well as Team Norka of VV Köln-Dünnwald.

Germany II followed closely at their heels on a score of 27.275. This team was represented by two men, Jannis Dewell and Julian Wilfling, as well as by the team Fredenbeck I, which won the group classification of the Sparkasse Prize yesterday for the second time in succession.

Third place went to Austria thanks to Dominik Eder, Sarah Koch and UVT Eligius, who together achieved a total score of 24.470.

The vaulters from Fredenbeck, who finished second in the Nations Cup competition were awarded more points than Team Norka again today – in spite of the fact that they had to replace a member of their team after Mila Koböck injured her foot during her performance yesterday. The individual vaulter Hannah Steverding filled in for her after memorising the very complex choreography yesterday evening in a flash and today, she performed with the team from Fredenbeck as if she had never done anything else. She received great recognition for her engagement for all sides.

The performances of the two individual vaulters were decisive for the triumph of Germany I. Jannik Heiland reaped an overall score of 9.268 for his “Genie” freestyle routine and the “Million Dollar Baby”, Janika Derks, was awarded a total score of 9.124. The two men from the rival team couldn’t keep pace here – although both received scores over 9. Jannis Dewell, who claimed the European Championship title here in Aachen in 2015, scored 9,097 for his “Eddy the Eagle” choreography, whilst the newcomer, Julian Wilfling, was awarded a 9.026 by the judges for his “Toy Story” freestyle.

If one takes a look at the scores, they are significantly higher than in the past years. The German national coach, Ulla Ramge, commented here as follows: “That is the whole point of it! I am delighted about the positive development the athletes are making!” Especially since several new faces competed in Aachen this year, such as Julian Wilfling and Hannah Steverding for instance, whom one will no doubt hear a lot about in the future. Whether in the individual, group or pair competitions.

A score of 8.497 vs. 8.481 – it was a close decision in the Pas de Deux of the Prize of Sparkasse, ultimately however it sufficed for the favourites to walk off with the victory.

The favourites are namely Janika Derks and Johannes Kay. Derks, who has celebrated something like the weekend of her life here in Aachen, winning all of the competitions she could possibly win and Johannes Kay, whom she has been competing in the pas de deux competitions with for three years and whom she already knew beforehand since both of them belonged to the RSV Neuss Grimlinghausen team.

The pair entered today’s final round with a clear headstart after the first freestyle competition. And indeed, they needed that lead. “We really had to fight today,” was how they summarised their own feelings after today’s performance. They didn’t make any huge mistakes that made them fall off their horse, Diamond Sky, lunged by Jessica Lichtenberg, but things didn’t exactly run smoothly for them either. They hadn’t got a clue why themselves. “We are still summing it up,” said Johannes Kay. “He (Diamond Sky, editor’s note) was more nervous than usual. That made it more difficult for us to keep the rhythm and hold our balance.” And that is the bee all and end all of vaulting. On their score of 8.382 they were “only” the third best duo today. But together with the result from the first round they were able to run into the circle as winners of the Sparkasse Prize.

Second place was claimed by Chiara Congia and Justin van Gerven, everything went right for them today. Their score for today’s performance, 8.726, even topped that of the ultimate winners’ first round.  For them it is the first complete season they have been competing together. And even if they were pipped at the post today, their performance on Picardo lunged by Alexandra Knauf was very promising for the future. Justin van Gerven reported later: “Yesterday, I made a mistake on dismounting. So, the goal was to perform an immaculate round. Mission accomplished!” And he added with a broad grin: “By the way, if one pulls that off amid such an atmosphere, one can be nothing else but overjoyed!”

There certainly was “such an atmosphere” in the Albert-Vahle Arena at the Aachen Soers, which was sold-out down to the last seat and this was totally new territory for the pair that finished third. Whereas Chiara Congia and Justin van Gerven have only recently come together in the pas de deux, they are both familiar with the CHIO Aachen from previous years. In the case of the pair in third place, the situation is the other way around. Diana Harwardt and Patrick Künne, both aged 18 and from Berlin, have been competing together for a long time and already picked up silver at the European Championships of the Juniors last year. However, they have never vaulted at the CHIO Aachen before. They put in an admirable performance: They were awarded the second-best result in both rounds. Both scores added together put them third in the final ranking.

The day in the Albert-Vahle Arena kicked off today with the groups that didn’t compete in the Nations Cup. There were two of them, both from Denmark. With a score of 7.963 Denmark BIS 1 on Turbo AF Kloster lunged by Maria Rasmussen defeated their fellow countrymen from the Thommysminde vaulting club with their horse, Carelato, lunged by Thomas Bisgaard. The judges awarded the latter team 7.276 for their performance. 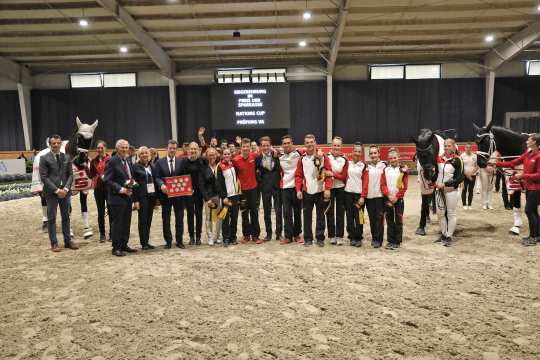 Congratulations to the Greek team Christian Burmester, stv. Chairman of the Board of Sparkasse Aachen (3rd from the left) and ALRV-President Carl Meulenbergh (left). Photo: CHIO Aachen / Photostudio Strauch