For the first time, the anthem “Unity and Justice and Freedom” didn’t ring out at the CHIO Aachen 2017. The victory in the Pas de Deux went to the favourites from Italy, the World Cup winners, Silvia Stopazzini and Lorenzo Lupacchini.

There was a fantastic atmosphere in the Albert-Vahle Hall when Silvia Stopazzini and Lorenzo Lupachhini began dancing on the back of Rosenstolz to Latino rhythms! “It was on the cards that the pair were going to put in a strong performance,” the national coach, Ulla Ramge, revealed, who wasn’t at all disappointed that her protégés didn’t win the Prize of Sparkasse in the Pas de Deux competition. “It is good for the sport!”

Indeed, together with their lunger, Laura Carnabuci, Silvia Stopazzini and Lorenzo Lupacchini put in a top performance: They were awarded 9.590 twice for their technical performance, a 9.290 for the artistic performance, which together with the score for the horse added up to an overall score of 8.933. The result meant the victory in this competition and also in the overall classification of the Prize of Sparkasse (8.757). Whereby the two acrobats weren’t even one hundred percent satisfied with their performance: “There were a few things we have to improve,” they admitted, for example the coordination to the very fast-paced music. They were nevertheless still delighted. Especially since they have only been together as a pair (in the sport) for a year, which means it was also their first joint victory at the CHIO Aachen.

Second and third place went to Germany. Whereby Torben Jacobs and Theresa-Sophie Bresch took it in turns with Jolina Ossenberg-Engels and Timo Gerdes. Jacobs and Bresch came second in round one with Holiday on Ice (Lunger: Alexandra Knauf) and third in the second freestyle. Ossenberg-Engels and Gerdes did it the other way round on Caram (Lunger: Claudia Döller-Ossenberg-Engels). In the end, Torben Jacobs and Theresa-Sophie Bresch achieved a slightly higher score with their “Bonnie and Clyde” freestyle routine. They collected 8.473 points, Ossenberg-Engels and Timo Gerdes finished on a score of 8.448. “Torben and Theresa competed with a reserve horse,” reported Ulla Ramge. “Timo and Jolina have a completely new horse and their performance is currently improving from competition to competition. So, we have every reason to be satisfied!”

The Austrian duo, Theresa Thiel and Stefan Csandl, came fourth with Crossino (Lunger: Karin Böhmer). In 2016, the pair enchanted the crowd with their Sissi freestyle choreography and claimed the victory. This year they placed their bets on animal jungle sounds, but weren’t able to repeat their previous year performances. The pair from the alpine country was awarded a score of 8.252. 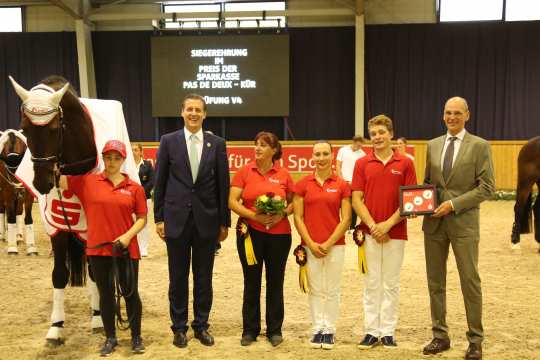