She is a double Olympian and three-time European Champion. She has won the Nations Cup several times with the German team, but today the German national anthem was played for Jessica von Bredow-Werndl alone in the five-star Tour in the Deutsche Bank Stadium for the first time after she rode to victory in the Meggle Prize with Ferdinand BB.

Jessica von Bredow-Werndl and und Ferdinand BB won the Grand Prix Spéciale, the MEGGLE Prize on a score of 73.511 percent. There were a few mistakes in the pair’s test, but the Olympic gold medallist, Jessica von Bredow-Werndl, was nevertheless very content: “Although he is already twelve, he is pretty new to the Grand Prix circuit and this is his first year at international level. He still lacks the strength and experience. But I am very proud of how he coped so well in this special stadium. I had a better feeling even if we did, like yesterday, make some expensive mistakes today. But I the riding felt better. I couldn’t be happier.”

Second place went to Australia, to Simone Pearce with the Hanoverian-bred, Destano, who is so-to-say treading in the hoof tracks of his father in the Deutsche Bank Stadium. His sire is namely Kristina Bröring-Sprehe’s Desperados, who has celebrated many victories here in Aachen. Today his son did all justice to him after achieving a score of 73.426 percent. That was a gratification for his rider after the Olympic Games in Tokyo, which were a “hard lessen” for her. But today Destano presented himself in top form.

Spain’s team rider, José Daniel Martin Rockx finished third with his PRE-bred horse, Malagueno LXXXIII, who was the last to go in the competition (72.787 percent).

After the class, tribute was not only paid to the winner and the placed participants, but also to Mr. and Mrs. Meggle. Toni und Marina Meggle have been asserting themselves for the equestrian sport for over 20 years in Aachen and above all for the well-being of horses. The ALRV President, Stefanie Peters, presented them with a silver platter as an expression of recognition and gratitude. 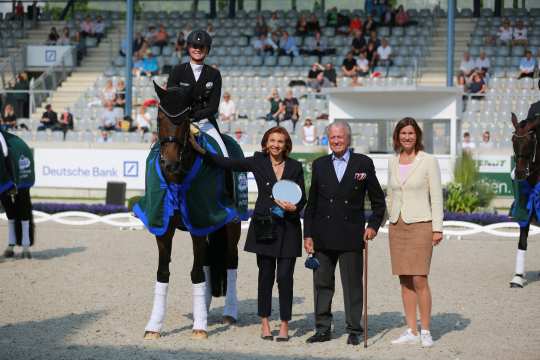