Final phase of the preparations

Casper is totally relaxed. Although the journalists are hustling around him clicking cameras. The horse is quite calm while being shod. The CHIO Aachen blacksmith, Gerd Lamberty, has come to the Soers eleven days before the show begins to show the journalists his forge and explain his job to them.

Carl Meulenbergh, President of the organising company of the CHIO, the Aachen-Laurensberger Rennverein (ALRV) and the Chairman of the ALRV, Frank Kemperman, took the representatives of the press on a walk around the showgrounds. Together with Ulrich Fischer of the Aachener Reitturnier GmbH (ART), who is responsible for the assembly of the “CHIO Village” explained the status of the preparations, recounted several amusing anecdotes and knew lots of interesting figures. For instance 803. That is how many obstacle poles the organisers of the CHIO Aachen own. Around 70 workers are currently busy erecting and expanding the “Champions’ Circle”. The restaurant is the largest tent on the showgrounds that is being put up at the moment. The tents cover a total surface of 22,500 square metres, the exhibitors originate from 16 nations. In the Champions’ Circle, Ulrich Fischer struggles to be heard. The tent is indeed already erected, however the interior design has only just begun. People are hammering, sawing and drilling everywhere. “The Champions’ Circle alone spans 2,400 square metres with a further 1,400 square metres for the kitchen area,” reported Ulrich Fischer. Around 300 employees from the Austrian catering company “DO & CO” are on-site.

In addition to forges, stables and the tent city, the tour also took a slight detour around the cross-country course, where Frank Kemperman introduced a new service, “we will inform the visitors about the cross-country competitions via two huge video screens.” First of all the eventers will be on the track in the “DHL Prize” on Saturday morning, July 21st, followed in the afternoon by the “Prize of the schwartz Gmbh“, the Marathon of the four-in-hand drivers. It will still be a while before the first horses arrive at the Soers, the vaulting horses will the first on the scene on Wednesday, July 11th. Casper travelled straight back home after the journalists’ visit. With his new horseshoes. 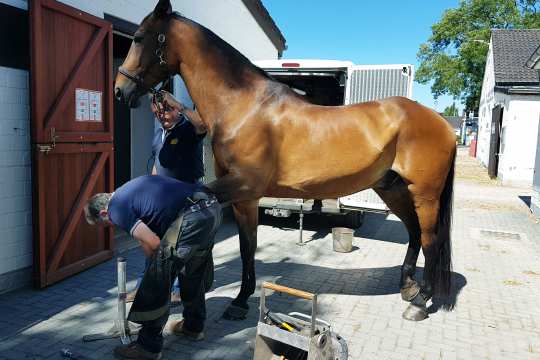