Veronica Ferres’ new film “Unter deutschen Betten” (Under German beds) will appear in the cinemas in October. A comedy about a burnt-out diva, who sells herself as a cleaning lady. Reason enough for the actress, who attended the Opening Ceremony and the “Media Night” at the CHIO Aachen on Tuesday evening, to get in on all the fun.

Kitted out with an overall, headscarf and duster, she polished the “Silver Horse”, the prize that she presented to Isabell Werth during the Opening Ceremony. Watched attentively by the dressage superstar Werth and her top horse “Weihegold”. Incidentally, Veronica Ferres’ wasn’t dirty enough. “I look like a doctor in this,” she grinned at the spotless white piece of clothing. Without further ado, she marched out of Stable 2 and right up to a huge pile of horse dung. Said “perfect” and rubbed the overall right through the dung. In true style and now, unfortunately, also rather smelly (Ferres), everything was ready for the photo and a brief chat about horses and the film.

You have a long-standing connection with horses…
Yes, I ride myself, have done since I was child, my uncle had a riding stables, directly opposite us. I sat on a horse just after learning to walk. It is a fantastic sport. I have also ridden with Isabell and Ludger Beerbaum during the opening ceremony of a show. That was an incredible feeling. If I wasn’t able to ride I would never have survived the appearance with Ludger and Isabell in canter (laughs).

And you are already familiar with the CHIO Aachen.
That’s right. I certainly have been here before, but it is an eternity ago. When did you say the club was founded? In 1898? Yes, it was around then the last time I was here. No, seriously: I am delighted to be a guest here and having the opportunity to meet up with my friend, Michael Mronz, the new Prime Minister of NRW Armin Laschet and of course all of the athletes.

And then you drove in a carriage …
Yes driving into the stadium in the carriage and presenting the amazing Isabell Werth with “The Silver Horse” was fantastic, the atmosphere is terrific. Isabell is an outstanding personality and she really deserved the award.

And beforehand you polished “The Silver Horse” personally.
Yes, that was good fun. Isabell and I laughed a lot and took a load of selfies. By the way, I found it very impressive how well-behaved and relaxed her horse “Weihegold“ is.

You are playing a cleaning lady in your new film that will be out in October, what is it about?
The film is a comedy and a wonderful story about friendship. It is very funny, it is the film version of a bestseller called “Under German Beds”. We demonstrate in a very amusing what people really look at home – taking a look at all walks of society. I play a pop singer, who is working on her comeback and everything goes wrong. The only person, who remains loyal to her, is her own cleaning lady. I move into her flat-sharing community and have to learn humility in order to become a real human being again. Ferres can be seen on her knees cleaning toilets. 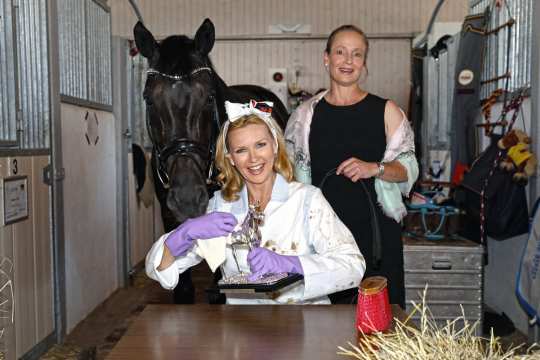