Six teams comprising of one world-class show-jumper, eventer and four-in-hand driving team apiece – are the protagonists that compete against each other in the Lavazza Cup. The winners in 2018 were a German/French trio with an Olympic gold medallist in their midst.

Michael Jung got the ball rolling with Chocolat, he passed over the baton to Denis Nielsen with Taquadriga and once he had crossed the finish line of the show jumping course, Jung took to his legs and jumped onto the carriage of the French driver, Benjamin Aillaud, who let his four horse power machine gallop at full pace across the ring. With a total time of 147.35 seconds Team Six took over the lead from Team One, comprising of Ingrid Klimke with Parmenides who sped over the natural obstacles, the Swiss show-jumper Alain Jufer with Casinjo Ex Z and his fellow countryman, Jerome Voutaz, who steered his carriage through the Soers. Their end result: 152.67 seconds. Third place went to the eventer Andreas Ostholt with Pennsylvania, the show-jumper Emanuele Gaudiano (ITA) with Herco van het Overlede Goed and the four-in-hand driver Chester Weber (USA). 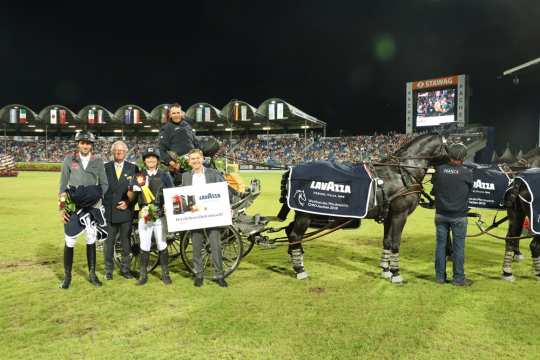