Fast and faster, Chacco Kid in the Prize of the StädteRegion Aachen

The Prize of the StädteRegion Aachen went to Canada, to a rider, who has already celebrated many great victories here at the CHIO: Eric Lamaze. This time his winning horse was called Cacco Kid.

Eric Lamaze last competed with the twelve-year-old Chacco Blue son in Spruce Meadows – very successfully. Chacco Kid also demonstrated his super form today with his performance in the Prize of the StädteRegion Aachen, a competition in two phases. “He hasn’t got the biggest canter,” his rider commented. “But he is extremely nimble, doesn’t lose any time over the obstacles and also has good reflexes.”  So you can just let him go when you are riding against the clock. Chacco Kid asserted himself with a time of 36.71 seconds against the Oldenburg-bred Le Carolus son, Lasse K, under Philipp Weishaupt. Only two hundredths of a second separated the German rider and third place, which was claimed by the American rider, Laura Kraut with Deauville S. Weishaupt and Lasse K crossed the finish line in a time of 37.64 seconds. For Kraut the clock stopped at 37.66 seconds. 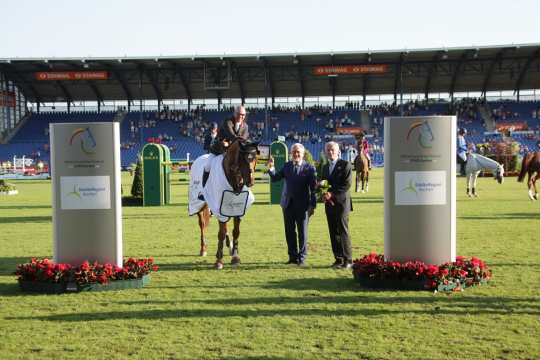