Exell overwhelms in the Prize of the Martello Immobilienmanagement GmbH & Co. KG

Netherlands in the lead in the Nations Cup

He may have broken his ankle, but the Australian driver, Boyd Exell, was and still is in a league of his own among the four-in-hand drivers. He impressively demonstrated this again today in the dressage competition of the Prize of the Martello Immobilienmanagement GmbH & Co. KG.

Boyd Exell can concentrate on not overstraining he injured ankle on Saturday during the Marathon. He won the Prize of the Martello Immobilienmanagement GmbH & Co. KG – which is also the first leg of the individual classification in the Prize of the Richard Talbot Family – with a score of 34.68 minus points. That gives him a comfortable lead ahead of the French driver, Benjamin Aillaud (41.29), who succeeded in relegating the co-favourite, Chester Weber (USA/42.18), into third place.

At the end of June, Exell landed unfortunately when jumping down from the coach box and broke his right ankle. Because he didn’t want to miss Aachen, he had his carriage converted so that he can brake with his left foot instead.

The Dutch have been unbeatable in the Nations Cup at the CHIO Aachen since 2007. And after the dressage competition in the Prize of the Martello Immobilienmanagement GmbH & Co. KG, in other words the first of three classes, the father and son duo, Ijsbrand and Bram Chardon, together with Koos de Ronde are on the road to success again. The Dutch team is currently heading the field on a score of 88.49 minus points ahead of Germany (94.68) and France (95.68).

From a German point of view second place is a huge success. The team comprises of the three drivers who took the European Championship title in 2015: Michael Brauchle, Georg von Stein and Mareike Harm. The latter delivered the best team result after finishing on a score of 45.13 minus points (6th place). Georg von Stein was awarded 49.55 minus points (8th place) and Michael Brauchle was the scratch score (58.93/19th place).

“We received two dressage scores with a 4 at the front, that was what we have always be striving for,” commented the delighted national coach, Karl-Heinz Geiger, who also has two individual drivers under his wing, namely Christoph Sandmann and his just 22-year-old daughter Anna, who is a real newcomer to the four-in-hand driving sport and who is competing in Aachen for the first time. After putting in two solid performances, the two “Sandmänner” finished 11th (50.97) and 14th (52.44) respectively in the individual classification. 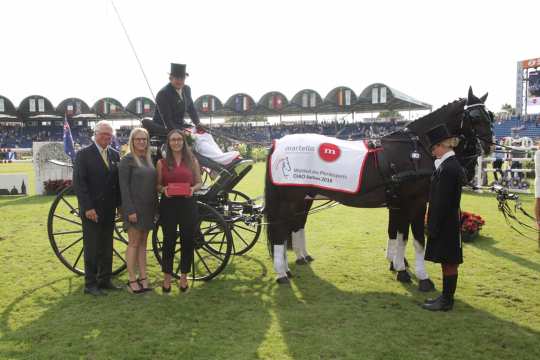