Emilio’s gift for Isabell Werth on her birthday: The victory in the Lindt Prize

The dressage queen, Isabell Werth, quite appropriately celebrated her 48th birthday at the CHIO Aachen 2017: With a victory in the Lindt Prize, the Grand Prix Spécial.

One could congratulate Isabell Werth twice today, once on her birthday and once for winning the Lindt Prize with Emilio. Whereby when asked about her birthday by a daily newspaper, she totally played it down: “Where we come from in the country, it’s one cow or others birthday every day.” She is not only an excellent rider, she also has a wonderful sense of humour. And above all she is a real fighter. “Yes, we wanted to put the mistakes of Wednesday right,” the six-time Olympic gold-medallist stated openly. In the Grand Prix she and her Westphalian-bred Ehrenpreis son weren’t in the best of form and had to make do with second place. Today, everything ran smoothly, 78.275 percent. There were admittedly a few slightly rough edges here and there in the test, i.e. a not so harmonious flying-change. Whether that was because Emilio was frightened of his own shadow? “No, that was me, I was a little in front of the movement. It is a bit like with non-swimmers, where it is always down to the swimming trunks!”

Second place went to the pair that won the Grand Prix, Helen Langehanenberg and Damsey FRH, who scored 76.686 percent. “I am overjoyed, not quite as speechless as yesterday, but delighted,” commented the team World Champion, whose overall Aachen 2017 balance was: “Much more than I had expected!” She has been riding the Hanoverian-bred stallion, Damsey, for one and a half years. And the pair continually improve. Where she thinks the journey will end? “Damsey is an absolute lucky bag. He never fails to surprise me. And I think in terms of his basic quality he has no limits.” All the more reason for looking forward to Aachen 2018!

As in the Grand Prix, the Danish rider Anna Kasprzak came third with her 18-year-old Donnerhall son, Donnperignon. The dark chestnut had had a longer time-out and has celebrated his come-back here in Aachen. One doesn’t notice that he is already 18 at all. On the contrary, some people say they have never seen the Finnish-bred gelding in such good form. The pair was awarded a score of 74.824. 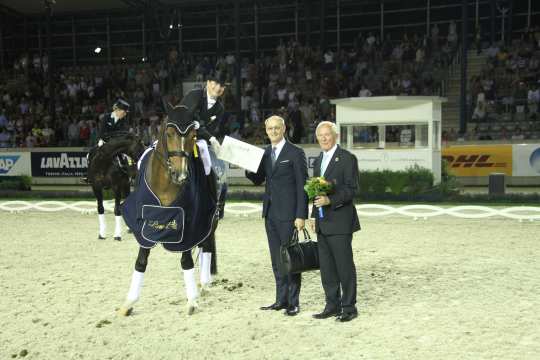