A moment for eternity

Gerrit Nieberg was the sensational winner at the CHIO Aachen 2022. After his triumph in the Rolex Grand Prix, the 29-year-old is now travelling to the Spruce Meadows Masters in Calgary (September 7th - 11th) as the contender for the Rolex Grand Prix of Show Jumping.

It was without doubt one of the biggest victories in my career so far and a truly sensational and very emotional moment for myself and my family. And to be honest, it took quite a while for the fact that it really happened to sink in. Every time I watch the ride, I get goose bumps. Every rider dreams of winning this class one day. That I have succeeded in doing so at such an early stage in my career is wonderful, of course. And now I really am the contender for the Rolex Grand Slam of Show Jumping. That is simply fantastic.

The jump-off in Aachen was extremely exciting. After your ride 40,000 spectators went wild – were you aware of that?

Definitely, at the end! But beforehand, especially when I rode into the arena, I simply tried to concentrate on myself and Ben and focus on sticking to the plan I had worked out for the jump-off.

You risked taking the shortcut that none of your fellow competitors before you had dared to venture. Was that planned?

Yes, I asked Steve Guerdat on the warm-up arena whether I could take the shortcut. He said, I could try it. So, that is what I did. But to be honest, I had assumed that all my colleagues, who went before me, had taken that route as well. It wasn’t until the crowd gasped during my ride that I realised that they perhaps hadn’t chosen that track.

In Aachen you were able to compete carefree. Whereas in Calgary all eyes are going to be cast on you. Does that put pressure on you?

No, for me experiencing that is an honour. It makes me proud. Of course, I am also a bit nervous, when I think about it. But I don’t want let that put pressure on me. I will try to concentrate totally on myself and Ben and do everything exactly the same way as usual.

You mentioned your horse Ben. What is he like?

Ben and I have been a team for four years already. There are a few special things I have to take into account when handling him. For instance, he likes to have a calm environment. At home, where he is generally much more relaxed than at a show, I often ride him at lunchtime, so that we have a little more peace and time for ourselves. He always needs slightly more attention, which I gladly grant him, of course. And he always gives me that back. He is always highly motivated at shows and always wants to demonstrate his full potential.

What are your expectations when you travel to Canada?

I accompanied my father once when he rode there a few years ago. That stadium is impressive, the obstacles are huge. But I have a very good horse, who is in very good shape and I would like to seize the opportunity that he is offering me right now. The Rolex Grand Slam of Show Jumping is a fantastic, very traditional series. One has a huge ambition to eternalise oneself in the history books. But of course I am realistic enough to know that this is the goal of all the other riders too. Ben and I will give it our best shot and then we will see what is possible. 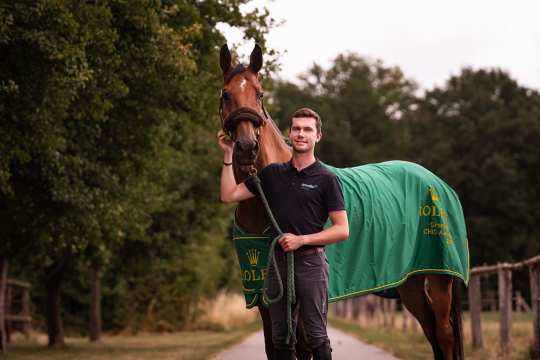