Edouard Schmitz wins the VBR Prize on his debut in Aachen

A selected field of competitors took part in the VBR Prize, a 1.45-metre jumping competition in two phases, the opening class in the Main Stadium on today, CHIO Friday, today, which ended with a Swiss double victory.

“Everyone wants to ride in Aachen, everyone wants to win in Aachen and to pull that off at my age, it is of course something really special,” the elated 22-year-old Swiss show-jumper, Edouard Schmitz, stated after it became clear that he and his 11-year-old Chai D daughter, Babylone des Erables, had clocked up the best time of 26.95 seconds over the 1.45-metre  course. They knocked six hundredths of a second off his fellow countryman, Pius Schwizer’s time, who had been in the lead until then with his Holstein-bred, Casall son, Casallino. Nicola Philippaerts from Belgium was the last starter with the Zangersheide-bred gelding, Khan vd Kattevennen Z. He didn’t quite manage to top Schmitz’s time, he reached the finished line with his Kannan son in a time of 27.20 seconds, which put the pair into third place.

Edouard Schmitz is one of the big aspiring talents of the currently so successful Swiss riders. From 2013 to 2019, he represented the Swiss national teams at European Championships across the age groups, from Pony through to Young Riders. He has now moved up to senior level and has already joined the world “elite”. His goal this weekend: To earn his ticket for the Rolex Grand Prix on Sunday in the RWE Prize of North Rhine-Westphalia. 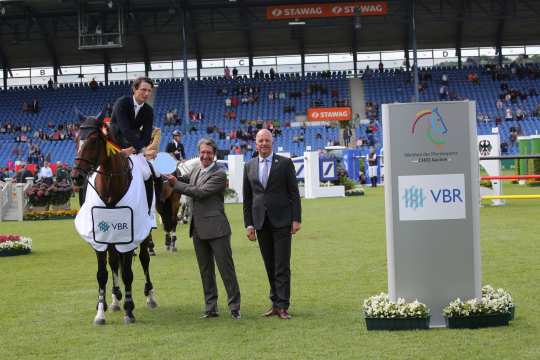